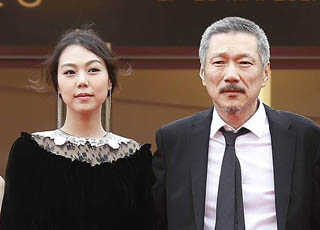 Despite an earlier report of their breakup that was published on Friday, it seems the extramarital relationship between director Hong Sang-soo, right, and actor Kim Min-hee is still holding steady a year after they went public with their relationship.

Local news outlet Sports World reported on Friday morning that “the two broke up a month ago,” citing an anonymous source from the movie industry. According to the insider, “Hong was worried very much about Kim’s future,” and decided to end the relationship.

However, numerous online accounts claimed that they had seen Hong and Kim together, including a very detailed account of the two in a restaurant in Korea last month.

While the first report of the breakup came from the fact that Hong had not accompanied Kim to the 68th Berlin Film Festival in February, another news article reported that Kim was at the festival, just not on the red carpet with the director.

Neither were available for comment as of Friday evening.

The two started their relationship while shooting “Right Now, Wrong Then” in 2015, and openly came out in March last year. The director’s divorce case against his wife is still in court.