Even though it’s still cold outside, cherry blossoms have bloomed early in Korea - in cafes and supermarkets. Food and beverage companies are hoping to use the country’s quintessential springtime flower to get to the hearts and pocketbooks of consumers.

Beverage giant Coca-Cola recently began selling its Classic Coke in a 250 milliliter (8.4 ounce) aluminum bottle decorated with cherry blossom patterns. Though the company has launched seasonal editions of the soft drink before, this year marks the first cherry blossom edition in Korea. They will be on shelves and in display cases until May.

Starbucks Korea first launched a cherry blossom marketing campaign in 2014. Each spring, it offers limited-edition merchandise decorated with pale pink floral designs, as well as beverages made with powdered cherry blossoms. The coffee giant employs a similar marketing strategy in Japan and China, though it localizes products and adjusts the promotion period to coincide with the blooming season in each country. In Korea this year, the campaign is scheduled to begin in the third week of March. 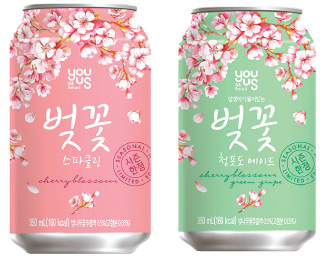 Ediya is introducing a Cherry Blossom Latte in stores this spring. The Korean coffee franchise hopes to draw in customers with its alluring pink latte, whose white foam is sprinkled with cherry blossom petals made from raspberry white chocolate.

“We launched a special seasonal chocolate drink for the first time last spring and saw sales jump 17 percent from the previous spring,” said Yun Hee-jeong, Ediya’s coffee marketing manager. “This year, we decided to use cherry blossoms as the main ingredient for their vibrant colors and association with springtime.”

GS25 began stocking its stores with You Us brand’s Cherry Blossom Sparkling from this Thursday. The soft drink, which come in a pretty pink with blossom illustrations, is made of extract from fresh cherry blossom petals. Last year, GS25 manufactured 300,000 of the beverages in an inaugural launch in late March, only to see them sell out in two weeks. The additional 500,000 drinks it stocked soon after sold out in less than a month.

This year, GS25 is introducing Cherry Blossom Green Grape Ade, concocted with cherry blossom extract and nata de coco jelly. The franchise will manufacture 1 million each of the two blossom-themed drinks to be made available in convenience stores and GS Supermarket outlets.

“Korea hosts many cherry blossom festivals but unlike Japan, has barely developed related products or marketing projects,” Kim Do-kyoung, a GS Retail beverage merchandiser, said in explaining the products’ birth. “We developed them hoping for an enthusiastic public response.”

The beverage industry is not the only one hoping to cash in on marketing the evanescent flowers. SPC Samlip, an SPC Group baked goods brand, released five kinds of rolls and pastries scented with cherry blossoms and flavored with strawberries and cherries.

“We launched the products for the first time using designs that represented spring,” said SPC Samlip marketing manager Lee Seung-woo, “and they already sold twice as much as the breads from the green tea series we launched last year.”

Le Creuset, a French cookware company, began offering a limited-edition of some of its most popular products in cherry blossom designs since last spring. Its collection includes a porcelain white cast-iron pot dotted with pink blossoms as well as a pale pink plate designed as a five-petaled flower.

“Consumers’ interest in our limited-edition grew as they placed high possession value on the products and found luxury cookware fashionable,“ said a Le Creuset spokesman. “Since spring overlaps with the wedding season, many people also buy the products as wedding gifts.”

“By integrating cherry blossoms, an emblem of spring, we can effectively express the thrill of a new beginning that consumers have during this season,” explained a Starbucks manager.

“Spring is an important time,” added a beverage industry expert, “because if we succeed with a seasonal promotion in spring, we can carry consumer interest and enthusiasm in our brands into summertime, which is traditionally the high season for the industry.”