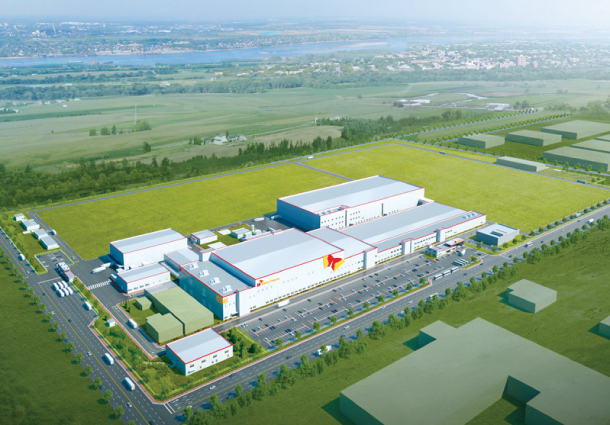 
In an attempt to bolster their businesses in global markets, Korean battery makers are building up new production sites in Europe, near the manufacturing bases of global carmakers.

SK Innovation held a groundbreaking ceremony for its electric car battery manufacturing plant in Komárom, Hungary. The construction follows a long-term supply contract inked with a European carmaker, according to the Korean oil refiner.

When construction is completed in 2022, the plan is expected to produce 7.5 gigawatt hours of batteries for electric cars a year. The capacity is about twice the existing factory of SK Innovation in Seosan, South Chungcheong, capable of producing 3.9 gigawatt hours of batteries per year. Production at the Hungary plant will begin from early 2020, before full completion of the production lines.

A total of 840.2 billion won will be injected to complete the construction of the factory on 43 square meters (463 square feet) of land in Komárom, located roughly 110 kilometers (68 miles) northwest of Hungary’s capital.

At the Hungary plant, third-generation electric car batteries, which can power cars for up to 500 kilometers per charge, will be produced according to the SK oil refiner. The batteries commercialized in the market are usually second generation batteries that powers cars up to 300 kilometers per single charge.

“In the near future, we expect a day will come for SK Innovation to supply batteries to electric cars all over the world,” said Chey Jae-won, executive vice chairman of SK Group.

SK Innovation is not alone in the move towards Europe.

LG Chem has already begun battery production in Europe at its plant in Wroclaw, Poland, from early this year.
The construction for the plant had begun in October 2016. The chemical company injected 400 billion won ($376 million) into building the plant. LG Chem plans to supply batteries for about 100,000 electric cars this year and expand the supplies to cover 300,000 electric cars in the near future.

Samsung SDI also has a battery plant in Goed, 30 kilometers north of Budapest, Hungary. The plant is scheduled to start operation from the second quarter this year. The plant in Goed is capable of producing batteries for 50,000 electric vehicles annually, according to Samsung’s battery maker.

Locating factories in Europe gives Korean battery makers several advantages. First, the factories are now closer to major European carmakers. Though carmakers like BMW, Mercedes-Benz and Volkswagen are headquartered in Germany, their production sites are often scattered in the Czech Republic, Poland and Hungary.

If part suppliers and automakers are close by, it saves the supplier logistical costs. Also, labor cost in Eastern Europe is relatively cheaper than other parts of Europe.

“We see a big opportunity in Europe,” Chairman Zeng Yuqun of CATL told Bloomberg. “Korean companies, using a low-price strategy to compete with us, haven’t made much technological progress in the past two years, while we have managed to grow fast and surpass them.”