Trump, Kim to hold summit by May

Trump, Kim to hold summit by May 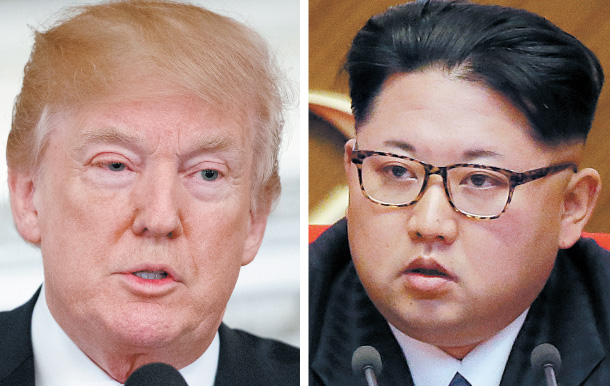 U.S. President Donald Trump, picture on the left in a photograph taken at the White House last month, accepts an invitation to a summit offered by North Korean leader Kim Jong-un on Thursday, saying they should meet by May. [AP/YONHAP]

In a dramatic shift in geopolitics, U.S. President Donald Trump accepted an invitation from North Korean leader Kim Jong-un to meet for talks about denuclearization, and a summit will be held by May.

“Kim pledged that North Korea will refrain from any further nuclear or missile tests,” continued Chung, who is chief of the National Security Office at the Blue House. “He understands that the routine joint military exercises between the Republic of Korea and the United States must continue. And he expressed his eagerness to meet President Trump as soon as possible.”

Trump’s acceptance of Kim’s invitation, if followed through, will lead to a historical first summit between leaders of the United States and North Korea. Chung briefed Trump and U.S. officials about Moon’s special delegation’s visit to Pyongyang at the beginning of the week and their meeting with Kim Jong-un. Chung’s delegation then flew to Washington on a four-day trip Thursday bearing a special message from North Korean leader Kim to deliver to Trump.

“President Trump appreciated the briefing,” Chung said Thursday, “and said he would meet Kim Jong-un by May to achieve permanent denuclearization.”

Chung went onto vow that South Korea and the United States and their partners around the world, “remain fully and resolutely committed to the complete denuclearization of the Korean Peninsula.”

He said, “Along with President Trump, we are optimistic about continuing a diplomatic process to test the possibility of a peaceful resolution.”

But Chung also indicated caution, adding, “The Republic of Korea, the United States, and our partners stand together in insisting that we not repeat the mistakes of the past, and that the pressure will continue until North Korea matches its words with concrete actions.”

He also credited the Trump administration’s maximum pressure campaign and international solidarity for bringing about the surprising developments.

Chung did not take any questions from reporters.

In January, South Korea and the United States postponed two-month joint annual military exercises scheduled for early spring to after the PyeongChang Winter Olympics and Paralympics, leading to a detente on the peninsula. But the joint drills, Foal Eagle and Key Resolve, are likely to kick off in early April, and may coincide with both the inter-Korean summit and planned U.S.-North Korea summit.

A rare inter-Korean summit, the third of its kind, is scheduled between Moon and Kim for late April at the truce village of Panmunjom in the demilitarized zone (DMZ) dividing the two countries.

This could mark a pivotal moment in U.S.-North Korea relations. In 1994, former U.S. President Jimmy Carter visited North Korea during the Bill Clinton administration to defuse a nuclear crisis and broker a deal with leader Kim Il Sung for the regime to freeze its nuclear program. In 2000, Secretary of State Madeleine Albright met Kim in Pyongyang to pave the way for Clinton to visit as president - which never happened. It was the last time a summit was proposed. (Out of office, Clinton visited Pyongyang in 2009 to secure the release of two detained American journalists.)

The North Korean leader’s message was delivered verbally rather than through a personal letter from Kim, according to the Blue House.

Trump was said to have immediately agreed to meeting with Kim when Chung raised Kim’s invitation.

“The hidden card was Kim Jong-un saying he wanted to meet in person with President Trump,” a Blue House official told the JoongAng Ilbo. “Rather than exploratory or preliminary talks, it indicates he wants to meet and arrive on a settlement right away.”

Earlier that evening, Trump announced in person to reporters in an impromptu visit to the White House briefing room that a “major announcement” about North Korea would be revealed soon. He had reportedly never been in that briefing room before.

The turn of events came after months of Trump threatening possible military action on North Korea and rolling out a series of tough unilateral sanctions for its nuclear and missile weapons program.

Trump, a self-fashioned dealmaker, has said from his days as a presidential candidate in 2016 that he is open to meeting with Kim, possibly “over hamburgers.” In May last year said he would be “honored” to meet with the North Korean leader “under the right circumstances.”

Trump tweeted Thursday after Chung’s statement outside the West Wing of the White House: “Kim Jong Un talked about denuclearization with the South Korean Representatives, not just a freeze. Also, no missile testing by North Korea during this period of time. Great progress being made but sanctions will remain until an agreement is reached. Meeting being planned!”

The message gained over 100,000 likes within several hours of being tweeted.

Trump “will accept the invitation to meet with Kim Jong-un at a place and time to be determined,” she said. “We look forward to the denuclearization of North Korea.”

But she added, “In the meantime, all sanctions and maximum pressure must remain.”

This comes after U.S. Secretary of State Rex Tillerson, who is currently in Ethiopia, said hours before in a press conference in Addis Ababa on direct talks with the United States and the North, “We’re a long way from negotiations.”

He also said, “I think as President Trump has indicated, there are potentially positive signals coming from North Korea by way of their intra-Korean dialogue.”

Republican Rep. Ed Royce of California, chairman of the House Foreign Affairs Committee, said in a statement after the announcement, “Kim Jong-un’s desire to talk shows sanctions the administration has implemented are starting to work.”

Royce said that it is important to break the cycle of the North Korean regime using talks to extract concessions and buy time, adding, “The United States and South Korea must stand shoulder-to-shoulder in applying the sustained pressure needed to peacefully end this threat. And Beijing must do its part.”

U.S. Sen. Bob Corker, a Republican of Tennessee and chairman of the Senate Foreign Relations Committee, likewise said in a statement said that the U.S. sanctions are clearly “having a real impact” but warned that “skepticism and caution are critical as these discussions continue.”

President Moon on Friday lauded the planned summit between Trump and Kim Jong-un, calling it a “miraculous opportunity” and conveying “deep gratitude to the two leaders for their courage and wisdom in making a difficult decision.”

“Following the inter-Korean summit, if [Trump and Kim] meet, we will, in earnest, be on track toward the complete denuclearization of the Korean Peninsula,” said Moon, according to Blue House spokesman Kim Eui-kyum in a briefing in Seoul. “This May meeting would be recorded as a historic milestone that drew out peace on the Korean Peninsula.”

He added, “In particular, the leadership of President Trump, who readily accepted Chairman Kim’s invitation, will receive praise not only from the people of the two Koreas, but also from people around the world wishing for peace.”

Moon named Im Jong-seok, presidential chief of staff, to head a committee to prepare for the upcoming inter-Korean summit, according to Kim.

“The preparatory committee will be mainly tasked with bringing about substantive negotiations to improve South-North relations at the inter-Korean summit in April,” Kim said.

Japanese Prime Minister Shinzo Abe Thursday hastily announced that he and Trump agreed to meet in the United States early next month to discuss the North Korea issue.

Trump and Abe held a phone conversation shortly after Chung’s announcement in which the U.S. president “expressed his hope” that Kim’s invitation to a summit “signals his desire to give the North Korean people a brighter future,” said Sanders in a statement.

Abe welcomed the change in North Korea’s stance on its willingness to start dialogue on the condition of denuclearization.

They also “affirmed their strong intention to continue close trilateral coordination with South Korea to maintain pressure and enforce international sanctions until such point that North Korea takes tangible steps toward complete, verifiable, and irreversible denuclearization,” according to the White House.

China also welcomed the news of direct talks between the United States and North Korea, its Foreign Ministry spokesman Geng Shuang said in a briefing, saying this is the “right direction to head toward to resolve the nuclear issue on the Korean Peninsula.”

Countless questions have been raised by the news, including where the first U.S-North Korea summit will be held.

Because North Korean leader Kim extended the invitation, Pyongyang is the most appropriate location. For security and safety reasons, Kim is likely to prefer his home terrain for the talks.

But Kim visiting Washington cannot yet be ruled out, and Panmunjom remains another possible option.

On Trump’s proposing to meet Kim in May, a Blue House official said, “There was even talk of meeting in April, but Chung conveyed it would be preferable to meet after the inter-Korean summit, so it was delayed slightly to May.”

But an exact location or timeline has not yet been clarified by the White House.