Trump plans to meet Kim Jong-un by May: Chung

Trump plans to meet Kim Jong-un by May: Chung 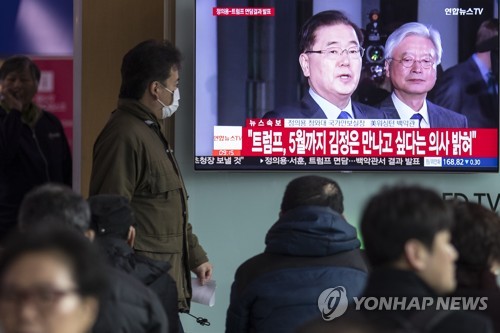 Chung Eui-yong, chief of the National Security Office at the Blue House, said Thursday outside the White House in Washington, “I told President Trump that, in our meeting, North Korean leader Kim Jong-un said he is committed to denuclearization.”

He continued: “Kim pledged that North Korea will refrain from any further nuclear or missile tests. He understands that the routine joint military exercises between the Republic of Korea and the United States must continue. And he expressed his eagerness to meet President Trump as soon as possible.

“President Trump appreciated the briefing,” Chung continued, “and said he would meet Kim Jong-un by May to achieve permanent denuclearization.”

Chung went onto vow that South Korea and the United States and their partners around the world “remain fully and resolutely committed to the complete denuclearization of the Korean Peninsula.

“Along with President Trump, we are optimistic about continuing a diplomatic process to test the possibility of a peaceful resolution,” he added.

But he indicated caution, adding, “The Republic of Korea, the United States and our partners stand together in insisting that we not repeat the mistakes of the past, and that the pressure will continue until North Korea matches its words with concrete actions.”

Chung during the short briefing said he “expressed personal gratitude to President Trump for his leadership” and also lauded his maximum pressure campaign.

He did not take any questions from reporters.

Chung is on a four-day trip to Washington since Thursday to brief Trump. He led a special delegation sent to the North to meet with Kim Jong-un earlier this week. He flew to Washington stating he had a special message to deliver to the United States from the North Korean leader.

An inter-Korean summit is scheduled for late April at the truce village of Panmunjom.

South Korea and the United States postponed their joint annual military exercises scheduled for early spring, to happen after the PyeongChang Winter Olympics and Paralympics, likely from early April.