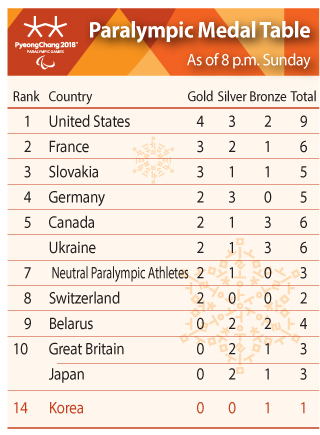 IOC President Thomas Bach and IPC chief Andrew Parsons held a joint press conference at the Main Press Centre in Pyeongchang County, Gangwon, to announce the signing of a new partnership between the two sport organizations.

“The IOC is very pleased about this new long-term agreement with the IPC because it was one of the recommendations of our reform program, Olympic Agenda 2020, to enhance the cooperation with the IPC in a way which gives long-term partnership and stability to both organizations,” Bach said.

“This agreement is really a historic step in the relationship and partnership between IOC and IPC. And this is why we are not only satisfied, we are very, very pleased to have come to this agreement and be able to sign it this morning.”

Bach, who attended the PyeongChang Paralympic Games opening ceremony on Friday, said that the IOC is looking to have close cooperation with the IPC with regard to the reforms of the Olympic Agenda 2020, the new set of rules which was approved just a couple of weeks ago in Pyeongchang to make the Games “feasible and more sustainable.”

“There will be regular contact and cooperation, so we will not wait to really exploit the potential of this agreement,” he said. “We will start from today.”

Parsons said the IPC is looking forward to “deeper cooperations” in other areas of the Olympic Agenda 2020, such as the Youth Olympic Games and Olympic Channel.

“It’s a very comprehensive agreement, not only for the management of the Games but also the brand,” he said. “The IOC and IPC will work together to enhance the Paralympic brand, so there’s a lot of cooperation when it comes to branding and marketing. Also, financial contribution from the IOC to the IPC.”

Parsons said that, in particular, he expects to see more benefits of working with the Olympic Channel.

“More than one billion videos have been viewed on the Olympic Channel, so we want in a few years that some millions of them are for Paralympic sport,” he said. “We’ll work together and it will be one of the main channels to watch para-sports and the Paralympic Games.”