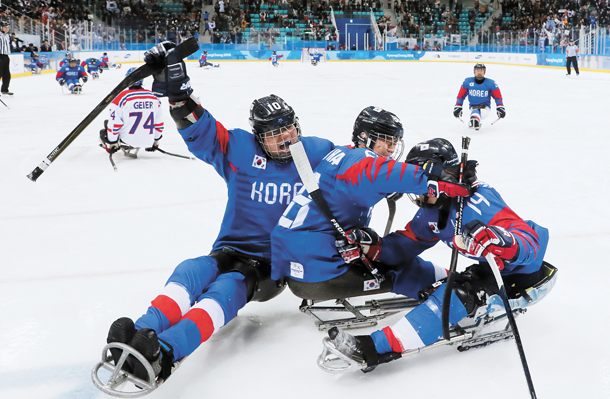 The Korean ice hockey team, in blue, celebrates after defeating the Czech Republic 3-2 in overtime at Gangneung Hockey Center in Gangwon on Sunday. [YONHAP]

The Korean para-ice hockey team defeated the Czech Republic 3-2 in overtime during a preliminary round game at the Gangneung Hockey Centre in Gangwon on Sunday.

After a goalless first period, Lee Ju-seung scored in the second period, allowing Korea to take the lead. At the start of the third period Michal Geier of the Czech Republic scored to tie the game. With just three minutes left on the clock, Jung Seung-hwan put Korea back in front but a late equalizer from Geier took the game into overtime.

If a para-ice hockey game is tied at the end of the third period it goes to sudden-death overtime. Jung scored just 13 seconds into the overtime, leading Korea to victory.

With two goals and an assist, Jung was named MVP.

With a victory, Korea is first in Group B with five points, two points ahead of the United States. Only the top two teams from each group advance to the semifinals, while the other four teams play in classification games.

Prior to the game against the Czech Republic, Korea defeated Japan 4-1 on Saturday.

Korea will play its final preliminary game tomorrow against the United States at the Gangneung Hockey Centre at midday.