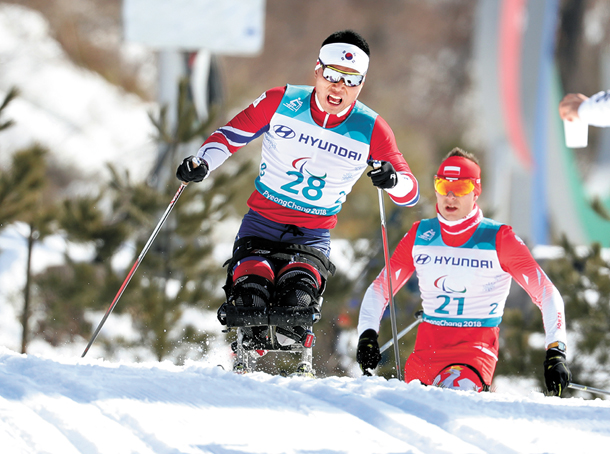 Not only was Sin Korea’s first Paralympian to medal in PyeongChang, but he also won Korea’s third-ever medal - and first bronze - at the Winter Paralympics. Sin also takes home Korea’s first medal in cross-country skiing.

“I feel honored to make history,” Sin said. “This is just the start.”

Having skied for the first time in August 2015, Sin managed to take home a Paralympic medal after just 31 months on the slopes.

“I never thought I’d be this successful when I started skiing,” Sin said.

Sin, born in Gongju, South Chungcheong, lost both his legs in a car accident a day before his college graduation in February 2006. Once he recovered from surgery, Sin struggled to come to terms with his impairment.

It wasn’t until 2009 that Sin started to accept what had happened. Taking up wheelchair basketball changed everything. It wasn’t long before he also took up ice hockey and wheelchair cycling.

“My only interaction with snow was sliding down a hill in my neighborhood when I was little, using a fertilizer bag as a sled,” Sin said.

When Sin first started skiing, he had more trouble than fun, but he still enjoyed the challenge. As well as training sessions, Sin kept up with all the different sports by watching videos of other athletes and teaching himself the techniques. During the summer, when there wasn’t any snow on the ground, Sin attached wheels to his skis and raced over the hills of Daegwallyeong, Gangwon.

And his hard work paid off.

“When we had to make the decision to amputate his legs, I couldn’t say a word,” said Sin’s mother. “All I could do was pray. I just wanted him to live and be healthy. But now that he has won a medal, I’m so thankful and proud of him. I’m very grateful for his hard work.”

Despite winning a medal, Sin, who carried the Korean flag during the opening ceremony, is yet to be satisfied.

Sin will compete in four more events, two each in biathlon and cross-country skiing.

While Sin won South Korea’s first medal in the men’s 15-kilometer race, North Korean skiers - Ma Yu-chol and Kim Jong-hyon - also competed in the event. Ma and Kim, who started skiing in December to compete at the Paralympics, were happy to complete the race. Despite finishing the race more than 30 minutes behind gold medalist Yarovyi, Kim was applauded by the crowd after he finished the race, as he continued his race even during the awards ceremony rather than quitting. Since two athletes did not finish the race, Ma and Kim weren’t last in the final standing.