Twins’ new pitcher Tyler Wilson expecting twins of his own

Twins’ new pitcher Tyler Wilson expecting twins of his own

American pitcher Tyler Wilson will be making his Korea Baseball Organization (KBO) debut with the LG Twins later this month. And as fate would have it, he will be a father of twins come August. 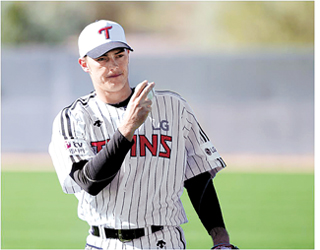 Wilson, formerly of the Baltimore Orioles, signed with the Twins on Jan. 5. And not long after joining the KBO club, he learned that his wife, Chelsea, was pregnant with twins.

“It’s pretty amazing. It’s been a wonderful story,” Wilson told Yonhap News Agency on Friday, after returning from the club’s spring training in Okinawa, Japan. “I am really thankful that the world has blessed us with the twins and the opportunity to be here in Korea playing for the Twins.”

And if Wilson can continue to pitch like he did in his most recent spring training outing, the Twins will feel blessed to have him, too.

On Wednesday, the right-hander stifled the Samsung Lions over three scoreless innings, striking out five. It was a bounceback game for Wilson, who allowed five earned runs in two innings against the Hanwha Eagles on Feb. 27.

“Physically, I feel really good,” the 28-year-old said. “My primary goal at the end of spring training is to be healthy and to be in a position to be physically strong and ready to go in the beginning of the season. It was really important to be able to face Korean hitters just to see the style of play, the pace of game, what the expectations are from the umpire, and from my teammates. It was important to get out there and get into a rhythm.”

Wilson has appeared in 42 major league games, all of them with the Baltimore Orioles, and compiled an 8-10 record with a 5.02 ERA. During the 2016 season and the early part of the 2017 season, Wilson was teammates with Korean outfielder Kim Hyun-soo.

And in an illustration of just how small the baseball world can be, the two have been reunited on the Twins - Kim signed with them in December, a few weeks ahead of Wilson.

“We used to joke about this in Baltimore that we’d play together one day over here as well and how cool that would be,” Wilson said. “It’s just amazing to see how baseball has brought us to two different parts of the world to play together on the same team. I am really excited.”

When they acquired Wilson, the Twins said they were counting on him to be an innings eater, and Wilson said he’s ready.

“My goal is to do everything I can to help the team win a championship. That’s the primary focus,” he said. “I am a firm believer that focusing on a team goal and something larger than myself will allow everybody to individually thrive more. If I am focused on winning every time I go out there and giving my team a chance to win, that’s the only thing that matters.”

Aside from the language barrier, Wilson said his biggest adjustment was the longer days at KBO spring training compared to major league camps. But he also said he embraced the chance to put in extra work.

“That was a welcome adjustment,” he said. “I actually really enjoyed it. I had to learn how to manage my body and how to be smart about the amount of time I worked and not overdo it too early.”

Wilson is part of a growing group of former major league players who have signed with KBO teams while still in their prime years of mid-to-late 20s. Gone are the days when washed-up big league veterans well into their 30s would come to Korea for their swan songs. Former KBO players like Eric Thames and Anthony Swarzak have made successful transitions back to the majors.

Wilson may be a prime candidate to take that route, given his age and ability to throw multiple pitches with solid command.

But the pitcher insisted he isn’t looking all that far down the road yet.

“I want to use this experience to learn as much as I possibly can and to ultimately enjoy this experience,” he said. “My focus is right here and right now, and being a pitcher for the LG Twins in 2018. Whatever happens in the years to come, we’ll cross that bridge when we get to it.”