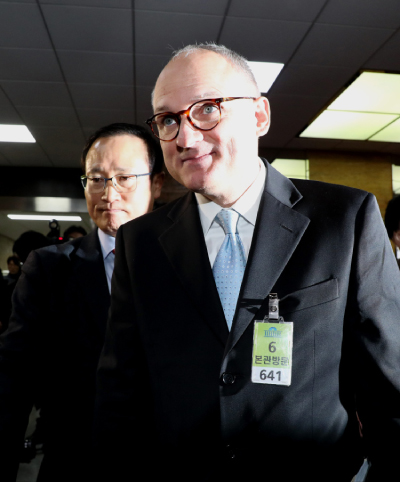 The state-owned Korea Development Bank said Sunday that it would thoroughly examine the cost structure of GM Korea this week as it mulls whether to provide new loans to General Motors’ loss-making Korean unit.

In a meeting with Barry Engle, executive vice president at GM, in Seoul on Friday, Lee Dong-gull, the bank’s chairman and CEO, agreed that the state lender would begin due diligence on GM Korea in a “fair and transparent” manner this week, though the Detroit automaker has yet to submit “very sensitive” data to the bank yet, a KDB official said over phone.

After last month announcing its plan to shut down one of four car assembly plants in Korea by May and decide on the fate of the remaining factories within weeks, GM has been putting pressure on KDB to participate in efforts to turn GM Korea around by injecting fresh capital.

In response, KDB demanded the U.S. carmaker present a concrete plan to revive and maintain its Korean operations in exchange for any financial help.

KDB is the second-largest shareholder with a 17 percent stake in GM Korea. General Motors controls 77 percent and SAIC Motor 6 percent.

GM said it would convert the $2.7 billion in debt it extended to GM Korea into equity and could allocate two new vehicles to its Korean plants if KDB decides to extend a financial helping hand to its unit. The U.S. carmaker also said it has to finalize its overall vehicle allocation plan this month, urging due diligence should be completed as quickly as possible.

If GM fails to submit the sensitive data to KDB, however, due diligence may not result in any fresh loan from the Korean government, officials at the state-owned bank said.

PricewaterhouseCoopers will carry out a detailed review on behalf of KDB with an aim to finish the process by the end of April, according to the bank.