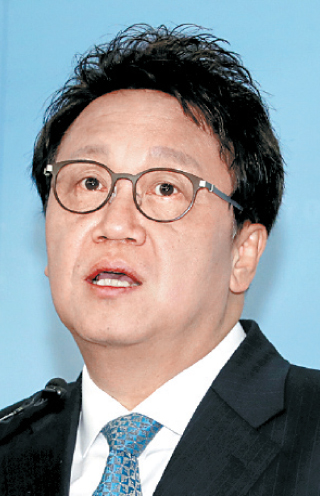 Another candidate for Seoul mayor faces allegations of sexual assault in Korea’s growing Me Too movement.

Rep. Min Byung-doo of the ruling Democratic Party announced his intention to resign as lawmaker and drop out of the mayoral race on Saturday, just days after another candidate was accused of sexual misconduct.

“I believe the decision to resign is the way to win back my honor,” Min told the JoongAng Ilbo. “I have seen in the past how lawmakers would use taxpayer money to pay for lawyers whenever they are embroiled in scandals, and that didn’t look good. I was always thinking that I’d be ready to step down from my post if I were found lacking in any way.”

“I do support the Me Too movement in Korea,” he added, “and I hope that it will serve its purpose.”

In a report released Saturday by the online outlet Newstapa, a woman accused Min of making unwanted sexual advances toward her at a karaoke bar in 2008, when he was not serving in the National Assembly.

The two became friends during a trip to the Himalayas in 2007, according to the report, and met for dinner in Korea in May 2008. They went to a karaoke bar afterward, where Min allegedly blocked the door with a table. The woman said Min asked her for a dance, and though she did not want to, she obliged. She recalled him trying to kiss her.

“His tongue came into my mouth and I didn’t know what to do,” she told Newstapa. “I sort of froze, and when I came around to my senses, I realized that my pants’ zipper was open. I guess he opened it because I don’t recall opening it myself.”

When questioned about the incident, Min said he could not recall the events. “We did go to a karaoke bar,” he said in the report, “and I think there was physical contact, but I’m not sure to what level. I am sorry if she felt that way, but I remember that the physical contact we had was not characteristic of that being discussed in the Me Too movement.”

After the report was released, Min said he would resign as lawmaker and exit the mayoral race.

“While I do not admit to the sexual harassment allegation, I also don’t think it’s right to go over every little detail and fact in a petty way to try to defend myself,” Min said. “It will be for the benefit of the Democratic Party that its lawmaker takes responsibility for any allegations.”

Min is the second mayoral candidate to face accusations from Korea’s snowballing Me Too movement. Chung Bong-ju, a former lawmaker
who served in the predecessor of the Democratic Party and is now running as an independent seeking Democratic endorsement, was accused on Wednesday of hugging and trying to kiss a college student at a hotel in 2011. He, too, denied the allegation but has not left the race.

The Democratic Party asked Min to withdraw his resignation on Sunday.

“I met Min yesterday and heard his story, and I told him it is imperative that we try to bring out the facts first,” Rep. Woo Won-shik, the party’s floor leader, wrote on his Facebook account Sunday. “Min said he has tried to live a clean life as a politician and that he feels embarrassed about a scandal concerning him going to a karaoke bar with a woman when he was not an incumbent lawmaker.

“Min said that he wants to win back his honor by shedding light on the truth as an ordinary citizen instead of as a politician,” Woo said. “I told him I cannot agree with that.”

“Min was at the time not an incumbent lawmaker, but he still should have been careful as a public figure,” Min’s wife, Mok Hye-jeong, wrote on her Facebook account Saturday. “If the woman had experienced something unpleasant, he must apologize.”

With Min’s announcement to drop out, the race for Seoul mayor in the Democratic Party has largely come down to a one-on-one competition between the incumbent Park Won-soon and Rep. Woo Sang-ho, who announced his bid on Sunday. Other Democratic candidates have either been embroiled in Me Too allegations or other scandals.

Rep. Park Young-sun was accused of using the power of her office to enter a restricted area at the Olympics. When Korean skeleton athlete Yun Sung-bin crossed the finish line last month to win Asia’s first medal in an Olympic sliding event, one of the first people to approach him was Park.

The zone was strictly off limits and only accessible to holders of an accreditation card. Park did not have a card, and neither did Yun’s own mother and sister, who were watching from the stands.

Public outrage festered when photos featuring Park and sports officials posing with Yun were circulated online. Critics accused Park of using her social status to gain exclusive access to the finish line, calling it an example of Korea’s deep-rooted culture of gapjil, or abuse of power.

Park still plans to announce her bid for Seoul mayor on March 18.

Many politicians and high-profile figures in entertainment have been felled by Korea’s Me Too movement, which took off in late January after Seo Ji-hyeon, a prosecutor, came forward with her story of being groped by a superior.

Last week, An Hee-jung, a former governor with presidential ambitions and the most prominent politician to face sexual assault allegations, stepped down from his post as governor of South Chungcheong after his former secretary accused him of rape.

Park Soo-hyun, a former Blue House spokesman who is running for An’s seat, was swept up in a media frenzy after his ex-wife revealed they had split last year because he was seeing a mistress.

Park denied the allegations and said his political enemies were using his ex-wife for political gain.