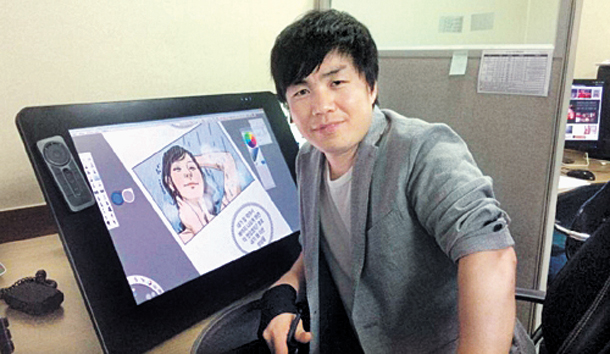 Choi Seong-guk, a cartoonist from North Korea, poses in his office in this undated photo provided by him. [YONHAP]

Choi Seong-guk could not understand why his mentor and boss was upset one day while working at a computer software firm in Seoul that he had just joined months after fleeing from North Korea in 2010.

The boss said Choi had not done what he was told to do, but Choi could not remembering receiving the order.

“I was very surprised at the time because I didn’t consider it an order when he just told me in a passing way, ‘I hope you can do this,’” Choi said. “In North Korea, we’re always told directly by the boss that we must do something and we say in response that we would risk our lives to do that.”

Episodes like this abound among North Korean defectors trying to adapt to a nation where the same language is spoken but the way words are used and understood is different from in their former communist homeland - increasingly so after more than 70 years of division.

Choi, 38, who graduated from the North’s best arts college, Pyongyang Art University, and then worked as a cartoonist at the state-run children’s animation production studio, is using such episodes for a web comic he’s publishing on South Korea’s most popular web portal, Naver.

The weekly serial, titled “Rodong Shimmun,” a parody of the North’s main Rodong Sinmun newspaper, comically portrays the experiences that fresh North Korean defectors go through after arriving in the South in a way that illustrates the cultural and linguistic differences between the two Koreas.

Recent episodes discuss how people in North Korea go about their daily lives, such as what foods North Koreans usually eat, how they date, what North Korean homes look like and how widespread South Korean dramas and songs are in one of the most closed nations on Earth.

Launched in 2016, the web comic gained a good level of popularity, with some of the episodes collecting close to 100,000 views. These stories were compiled and published in a book series under the title “In Search of Freedom” in January.

Other defectors have also praised Choi’s work, saying the comics remind them of when they were struggling to settle in the South and that they portray the cultural differences between the two sides very well.

“My ultimate goal is to help people from the South and the North better understand each other,” he said.

In North Korea, Choi had a “dream job” as an employee at the children’s animation studio. Benefits provided to employees by the state included one bottle of cooking oil, 1 kilogram (2 pounds) of beef and 1 kilogram of sugar every month, even when state rations were suspended.

They were also given a television set, refrigerator, washing machine or bicycle once a year as a bonus depending on their performance. They could also be given an opportunity to travel abroad, a huge privilege in the North, where overseas trips are usually only possible for people who have a child back home, a hostage system designed to prevent them from defecting while overseas.

But Choi quit the studio after learning that foreign co-workers there, such as those from Italy and France, receive much higher salaries than North Korean staff, even though their skill levels are similar. He said he wanted to start his own business to make more money.

That was the beginning of a big change in his life.

At first, he used a connection to state-authorized traders to import broken computers from overseas and used parts from them to assemble new computers for sale. After discovering South Korean dramas in the hard disks of broken computers, Choi made more money by making video CDs of the dramas.

The video CD business, however, put him in trouble.

After finding out that Choi was selling South Korean dramas, authorities sent him from Pyongyang to the remote east coast city of Riwon in South Hamgyong Province as punishment. Members of his family - his parents, a sister and a nephew - were also briefly detained.

It was at that time that Choi decided to flee the North. He used the money he made from selling computers and video CDs to first get his family out of the country. After serving a prison term and receiving other punishments for his family’s escape, Choi also succeeded in getting himself out in 2010.

As South Korean movies and dramas became popular, more and more North Koreans learned about the reality across the heavily fortified border. People also made and sold clothes and other items that appeared in those movies and dramas, such as the school uniform worn by actress Moon Geun-young in the 2004 movie “My Little Bride” and furniture that appeared in the popular 2004 TV drama “Lovers in Paris,” he said.

Choi said he does not believe North Korea’s leadership will ever change or give up its nuclear program and that one of the most effective ways to undermine the regime so as to bring about a change in the country is through culture and outside information. “As a government policy, we should send things like CDs [into the North] in massive numbers,” he said.