McKeever goes for his 12th gold in cross-country skiing

McKeever goes for his 12th gold in cross-country skiing 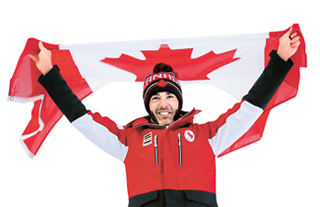 McKeever clocked 46 minutes and 2.4 seconds, a full minute and a half ahead of silver medalist Yury Holub of Belarus. Thomas Clarion of France won bronze, clocking in at 53 minutes and 52.3 seconds.

The 38-year-old Calgary native started skiing at age 3 and competing at age 13. Although he was good enough to join the Canadian youth cross-country team, his career was cut short at the age of 19, when Stargardt’s disease, an inherited retinal disorder, impaired his vision.

With the help of his brother Robin as a guide, McKeever started a Paralympic career in cross-country, competing at the 2002 Winter Games in Salt Lake City. They won seven gold medals across three Paralympics from 2002 to 2010. In 2011, the McKeever brothers were inducted into the Canadian Disability Hall of Fame.

Though Robin no longer races with Brian, the brothers are once again working together at the PyeongChang Games, with Robin as Brian’s coach. McKeever is competing in three cross-country events: the 1.5-kilometer sprint, 10-kilometer freestyle and 20-kilometer freestyle, in which he won gold on Monday.

He will attempt a 12th gold medal in the 1.5-kilometer sprint on Wednesday.

McKeever is notable for being the first Canadian athlete to qualify for both the Olympics and Paralympics. During a race in December 2009, McKeever won a spot on the Canadian team for the Vancouver Olympics, relying on 10 percent of his vision and his memory of the course.

He was set to compete in the men’s 50-kilometer event, but the team’s coach replaced McKeever at the last minute with another athlete who did well in a previous event. McKeever missed his chance to become the first athlete ever to compete in both the Olympics and Paralympics in the same year.

Although he has won the most gold medals among participating athletes in the PyeongChang Games, McKeever is still behind Ragnhild Myklebust of Norway in the all-time record for gold medals.

Myklebust, who competed in cross-country skiing, biathlon and ice sledge (which is no longer a Paralympic sport), won 22 gold medals throughout his Paralympic career from 1988 to 2002.

In overall Paralympic history, swimmer Trischa Zorn of the United States holds the record for most gold medals, 41 across a career that spanned from 1980 to 2004.