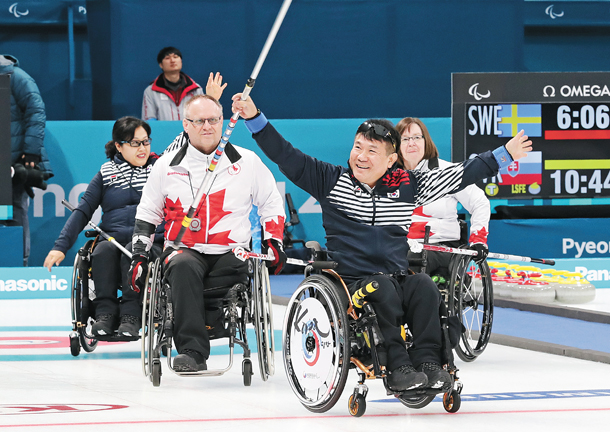 The Korean wheelchair curling team, in black, celebrate after defeating the fourth-ranked Canada 7-5 in a round robin game at the Gangneung Curling Centre in Gangneung, Gangwon, on Monday. With four straight victories, Korea is ranked second, one game behind China, as of 7 p.m. [YONHAP]

The Korean wheelchair curling team has defeated Canada, the fourth ranked team, 7-5 at the Gangneung Curling Centre in Gangwon to maintain its unbeaten record in the round robin.

As of 7 p.m. on Monday, Korea is in second place in the table, sitting one win behind China with one game in hand.

In fact, the wheelchair curling team, known as the Oseong Avengers, is already beating Team Kim’s record. The women’s squad lost one game in the round robin - their second game against Japan.

In wheelchair curling, all 12 participating teams play against each other in a round robin format and the top four teams advance to the semifinals while the other teams play tiebreaker games.

“Seven wins and four losses will be good enough to advance to the semifinals,” said Baek Jong-chul, coach of the curling team. “We’ll try our hardest in the remaining games.”

Though Canada is ranked fourth in the world, they are still considered a curling powerhouse. But on Monday, the Canadian team didn’t live up to their country’s reputation, constantly making mistakes and failing to read the condition of the ice.

“We drew pictures after each end based on our analysis of the Canadian curlers,” explained Seo. “The strategy from our coaching staff worked out perfectly.”

In curling, the name of the team is normally based on the surname of the skip, hence Team Kim. The wheelchair curling team went in a different direction with their name Oseong Avengers. The first syllable oh is Korean for five, while seong means both surname and star. The Oseong Avengers are a five-star team with five different surnames.

It’s not just the surnames that set this squad apart from the well-known women’s team. While Team Kim is from North Gyeongsang, the wheelchair curling squad consists of players from different teams.

Since teamwork is crucial in curling, a team is selected to represent the country at the Olympics rather than individuals. The members of Team Kim said they can figure out the amount they need to sweep or when to start sweeping based on the tone that Kim Eun-jung yells “Yeong-mi,” as they’ve been playing as a team for almost 10 years.

Though wheelchair curlers don’t have to sweep, teamwork is still considered the most important factor in the sport. Since there’s a time limit, curlers have to quickly decide where to place the stone and how to play the game.

Despite opposing opinions from other curling teams, the decision to put together the best team rather than selecting an existing team to represent Korea eventually went ahead.

The qualification process took more than two years. Starting in 2015, the top six curling teams in Korea were selected. By August 2016, the final list had been whittled down to eight curlers, two in each position, for the final qualification.

The eight curlers competed in international events and five players were selected as the final members of the team. Seo, Bang and Cha play for a Seoul-based team, while Lee plays for a squad from South Gyeongsang and Jung is part of a Gyeonggi-based team.

As the five players played for different teams, it took them a while to gel as a team. Just like the heroes in the movie “Avengers,” the team didn’t live up to expectations in the beginning. During the World Wheelchair Curling Championship 2017 in Gangneung, considered a test event, Korea finished sixth.

“We fought a lot,” said Seo. “In the beginning, since only five out of eight curlers were going to compete at the Paralympics, we had a strong sense of rivalry within the team.”

And Baek also agreed that the hardest thing in the beginning was to build teamwork. The curlers had continuous disagreements and had almost no teamwork, but their united goal of “winning a Paralympic medal,” eventually brought them together.

The biggest change the team made was picking Cha as the last person to slide the stone. In curling, the skip typically slides the last stone, but since a competition in Finland in January, Cha has last rather than Seo. During the game against Canada on Monday, both Seo and Cha had a successful double takeout in the eighth end.

“It was overwhelming in the beginning but Seo encouraged me a lot,” said Cha.

“Rather than my self-esteem, it’s more important to win,” Seo said. “We have to play according to the coaching staff’s suggestion.”