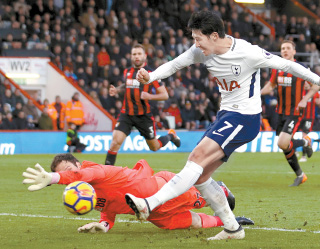 Son Heung-min of Tottenham Hotspur scores Spurs’ third goal of the game against AFC Bournemouth during the English Premier League match at the Vitality Stadium on Sunday. [AP/YONHAP]

Son extended his scoring streak to four matches after scoring twice in Spurs’ 4-1 win against AFC Bournemouth in their English Premier League (EPL) match on Sunday. The 25-year-old now has 18 goals this season, seven of which have come in the last four matches.

Shin said Son’s red-hot form is exciting, but also a cause for concern.

“I hope Son can perform in the World Cup like he currently does for his club,” Shin said during a press conference at the Korea Football Association (KFA) headquarters in Seoul. “But I’m concerned that Son’s red-hot form could cool down around the World Cup period.”

Korea is in a tough group at the 2018 FIFA World Cup, which kicks off in June in Russia. They’re in Group F with defending champions Germany, Mexico and Sweden.

“No player can maintain his best form all season long,” he said. “For most Europe-based players, they are used to getting in shape in August before the new season starts. I’m really worried that Son’s form might go down from May, with his concentration waning and him becoming physically fatigued.”

Son, who has 20 goals in 61 international caps, was included in Shin’s 23-man squad for the upcoming friendly matches in Europe. Shin’s side will first face Northern Ireland at Windsor Park in Belfast on March 24, and will take on Poland at Silesian Stadium in Chorzow three days later.

Shin said he believes Son will show his best performance whether he plays as a lone striker up front, or as a left wing forward. But the key is how to build their attacking line around Son.

“Whether he plays as striker or wing, I have to talk with Son and other forwards on our attacking force after they all join the team next Monday,” he said. “I have some thoughts, but I can’t release details that would give too much information to our opponents.”