Team Kim won, but at what cost?

Team Kim won, but at what cost? 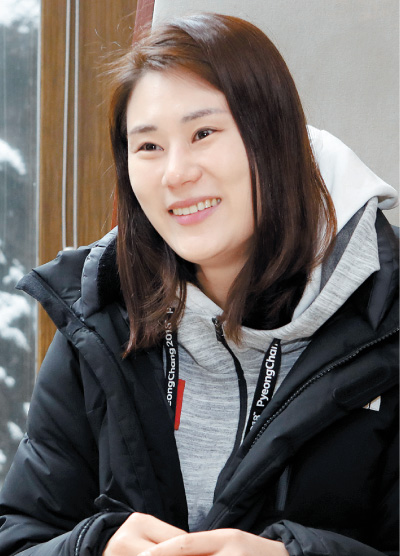 Curling Coach Kim Min-jung discusses her coaching experience with the JoongAng Ilbo on Thursday during an interview at a cafe at the Daegu Grand Hotel in Daegu. [SONG BONG-GEUN]

Curling is enjoying an unexpected heyday in Korea, prompted by Team Kim’s historic silver medal at the 2018 PyeongChang Olympics. But as fans replicate skip Kim Eun-jung’s famous look - no-nonsense wire-framed glasses and a front plait - and companies queue up to offer sponsorship deals, few recent curling converts realize that a big part of the sport’s Olympic success is down to the perseverance and sacrifice of the sixth member of the team, Coach Kim Min-jung.

Kim and her husband Jang Ban-seok, the head coach of Korea’s mixed doubles curling team, made the difficult decision a year before the Olympics to leave their three-year-old son in the care of his grandmother in order to focus solely on PyeongChang.

Although it was difficult for their son to accept their absence and the couple barely saw each other - one month, a hasty one-hour meet-up in Incheon International Airport was all they managed - Kim was willing to put everything on the line to get her team to the Games.

“I’m not depressed, but I do think I need some help,” said the coach. “I constantly feel nervous.”

In many ways, Kim is Korean curling royalty. Her father, Kim Kyung-doo, is the head of the Gyeongbuk Uiseong Curling Training Center and the man responsible for first introducing the sport to Korea in the 1990s.

The coach sat down with the JoongAng Ilbo, an affiliate of the Korea JoongAng Daily, last week in Daegu to talk about her struggle and the tensions between the Uiseong curling establishment and the Korean Sport & Olympic Committee (KSOC).

Q. Why do you think people were so enthusiastic about curling?

A. I think the audience found it refreshing to see the teammates come together to put in their all to achieve something. People saw the look in their eyes to try and pull through at whatever cost. Our players kept winning against the strongest teams and I think people could see themselves in our team. It is also possible that [they were enthusiastic] because there wasn’t any bias in favor of the team from the referees, nor did it seem like they got lucky; the team just had a clean sharp edge to it.

Did the team decide among themselves that they would have their cell phones taken away throughout the Olympics?

Canadian curling heroes Kevin Martin and Ryan Fly advised that it is important to cut off outside influences during the Games. So I proposed that the athletes leave their phones, but they weren’t as opposed to the idea as I thought. In place of their phone though, I allowed them to listen to music on their MP3s and brought board games for them. As for their alarms, they used their watches. After hearing the media response to the team’s first match, I thought that no matter what, I must not return their [phones] to them.

Did you have a hard time dealing with the media?

I didn’t realize how scary the media zone was. No matter what, I had to do a 90 degree bow and ask them to be understanding. When reporters asked questions, I was able to organize my thoughts before answering. After winning three matches, they asked, “How many more games do you think the team will win?” When I heard this question, I thought, “Wow, they really don’t know how much we prepared for this.” We didn’t come to the Olympics just to win three, four matches. I told them that we came to write a new history for Korean curling because we felt a sense of duty to do so.

There is a rumor that the “Kim family is eating it all” [a derogatory expression referring to Kim, her father and her husband’s positions in Korean curling]. Have you heard of it?

I’ve always heard it. I want to ask them what exactly it is that they think we’re gaining. If I was doing this to exploit it and make profit off of it, I would be embarrassed. My father used his own money and sacrificed so much to get curling where it is today. My father took the lead, and I wanted to show that everything he has done so far was not a mistake.

What did the athletes say?

After the curling federation became part of the KSOC, I was informed that a committee member asked the team, “I heard curling is dominated by one family, what do you think of that?” They even said that they think there is a problem with me and asked if it wasn’t “time to change coaches.” The players told me that they were so confused they were getting these kinds of questions right before the Olympics and got really angry.

During a team qualification game to participate at the Olympics, you were kicked out of the arena and received disciplinary action. How did that happen?

During the first qualifying round, someone who wasn’t qualified was made referee. One team kept getting favorable results and ultimately played against our team. They illegally touched a stone, but the referee didn’t call it out. We requested a video playback, but the referee told us that they don’t do that kind of stuff, and told us to move on. As I raised my voice, the referee ordered me to leave and I was kicked out of the arena.

What do you mean the referee wasn’t qualified?

Recently, there was an announcement that the curling federation was recruiting first-tier referees. Including me, there were 12 applicants and the referee who kicked me out was also on the list. That person was both an applicant and an interviewer. I asked the federation if that was even possible. But they told me, “The applicant will be interviewing and will go to the interviewee area when it is their turn to be interviewed.” I wasn’t selected but that person was. I’m worried about the future. I’m thinking of suing if I receive disciplinary action.

What are some of your concerns?

It’s not over yet, but everyone thinking that it’s over is making me nervous. We have to advance to another level, but it feels like something is pulling us back. We’re getting a lot more spotlight than I expected. We planned to rest a bit before going to the World Championships in Canada [on March 17], but now I can’t help but be worried about the results.

How are the athletes handling the sudden change?

The team is actually not as affected as I expected them to be. I do think that I have to let them have a bit of fun. I predicted this result. To achieve it, we first practiced on how to place the first stone during the first end, and trained several thousand times. I even coached them on how to maintain their facial expression during the games, down to their high-fives. If they place their hand too low, I told them it looks like they lack confidence. Whatever they learned with their hard work, they open it up to other athletes.

How many more people do you think are interested in curling now?

In so-called unpopular sports, stars like Kim Yuna make a debut and they have to keep up their performance. If our nation also hosts more prestigious curling competitions and tours, I think we will maintain the high interest we have now. We hoped that when people hear “curling,” during the Olympics, they will go, “Oh, curling!” We take pride in having achieved that goal.