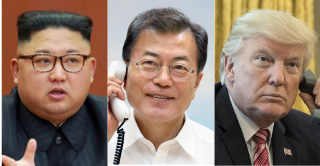 Perhaps because of how it was created, the Peace Prize is the most controversial among the six Nobel Prizes. Politics often affects the award. Former Japanese Prime Minister Eisaku Sato is considered one of the biggest mistakes. He was awarded the Peace Prize for the Three Non-Nuclear Principles — non-production, non-possession and non-introduction of nuclear weapons.

However, in 1969, he signed a secret treaty with U.S. President Richard Nixon to allow stationing of nuclear weapons in the Okinawa base in case of emergency. Around this time, the foreign ministry drafted a report that Japan may not possess nuclear weapons but should have the capability to produce them. The maternal granduncle of current Prime Minister Shinzo Abe advocated nuclear armament but hid his true intentions.

In 1994, as Yasser Arafat, chairman of the Palestine Liberation Organization, Yitzhak Rabin, prime minister of Israel, and Shimon Perez, Israeli foreign minister, shared the prize, one of the Norwegian Nobel Committee member said that the prize was awarded to terrorists and resigned.

In 1973, U.S. Secretary of State Henry Kissinger received the prize for peacemaking in Vietnam, but Le Duc Tho, who was to be jointly awarded the prize, declined it on the basis that peace was yet to come to Vietnam. Just as Le Duc Tho said, Vietnam was immediately in conflict.

Barack Obama also received the peace prize in the first year of his presidency for efforts for nuclear reduction, but he was ridiculed for winning the prize not with accomplishments but with words. Some claim that former President Kim Dae-jung only allowed North Korea time for nuclear development after receiving the prize.

With an inter-Korea summit and a U.S.-North Korea summit ahead, there are hopes of winning a Nobel Peace Prize. Some say that President Moon Jae-in, U.S. President Donald Trump and North Korean leader Kim Jong-un could share the prize. They certainly deserve the honor if they really can end the nuclear crisis hovering over the Korean Peninsula for decades at once.

But there is a long way ahead with many obstacles. I am concerned that South Korea may get caught between the United States and North Korea. Of course, failure will lead to a bigger crisis. I hope that Nobel’s belief that strong weapons can bring peace would not return.