Flashy and sleek smartphones and tablets greet visitors at the Samsung Olympic Showcase, the company’s display and experience space near the Pyeongchang Olympic Stadium in Gangwon.

Most of the items were designed to simply entertain people, but one section set a different tone.

Relumino is an app that works in conjunction with the Samsung Gear VR headset to help people with visual impairments see more clearly.

Able-bodied visitors were encouraged to try on glasses designed to mimic the clouded sight that somebody with a visual impairment might experience. With the glasses on, visitors then donned the Relumino-equipped Gear VR. By tapping and rolling the side of the VR device, the blurry sight became clearer with thicker lines allowing the user to discern their surroundings.

For many people, new technology offers nothing more than efficient and streamlined ways of going about their business, but for some, the latest advances can be life-changing.

Korean tech giants like Samsung Electronics and a number of start-ups have just recently started taking up the challenge of using technology to help people with hearing and visual impairments, though their efforts are still in the early stages. 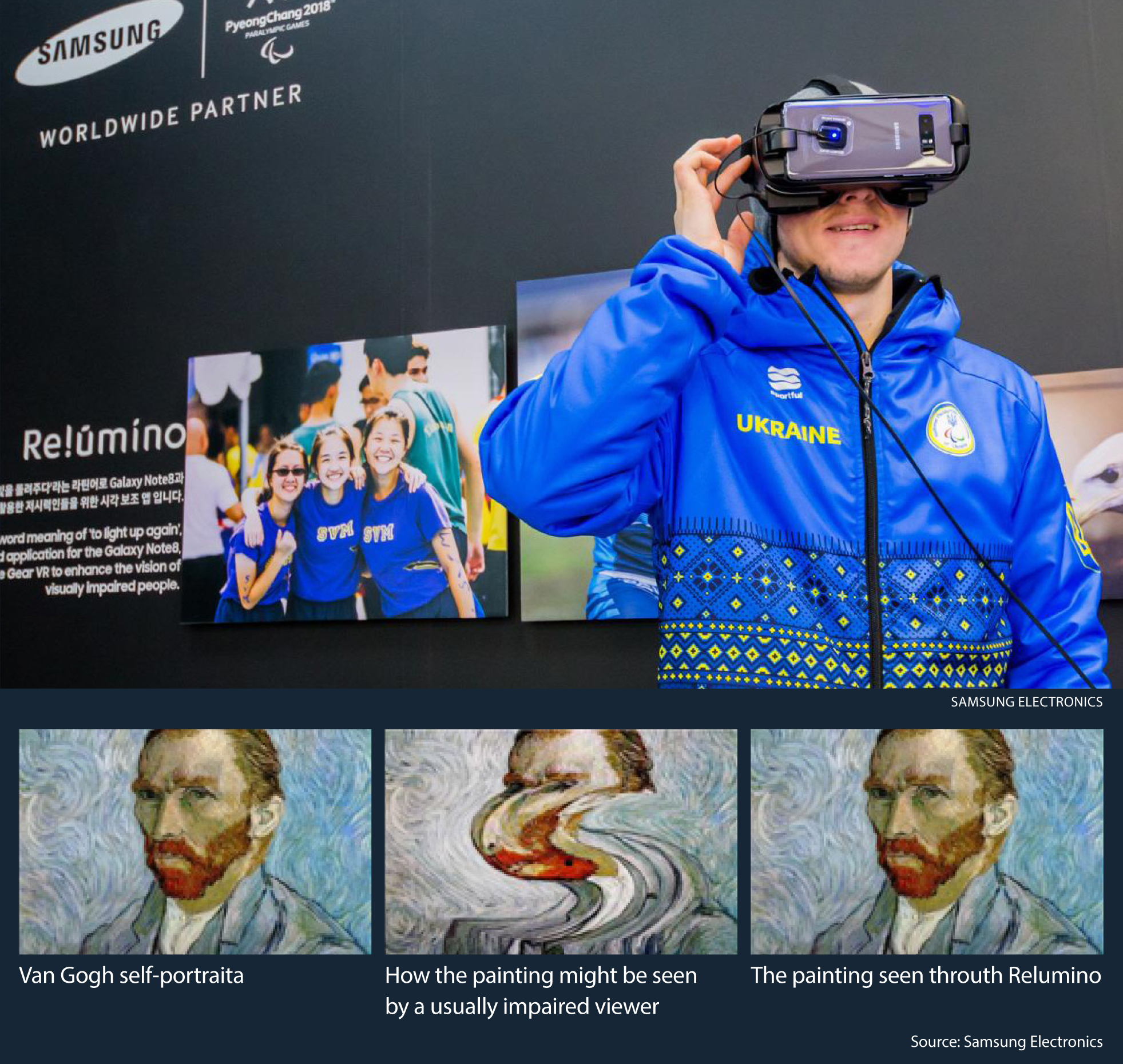 A visitor tries on Samsung Electronics’ Relumino at the company’s showcase in Gangneung Olympic Park in Gangneung. [SAMSUNG ELECTRONICS]

The realm of assistive technology could seem less attractive to entrepreneurs because its client base is smaller and often has relatively less purchasing power.

But the entry of a tech behemoth like Samsung has the potential to scale up the business and bring in more players. Relumino was created through the company’s in-house accelerator C-Lab, where Samsung employees can freely build and develop prototypes and projects.

Kim Yong-nam, a member of the C-Lab’s Relumino team, was surprised to hear that more than 90 percent of visually impaired people spend their free time watching TV.

“I didn’t know that people could actually watch things,” he said. “We wanted to help people with limited vision better watch TV and see their surroundings and pictures.”

The project was initiated in 2016 with three software developers including Kim, before later bringing in three more hardware architects. 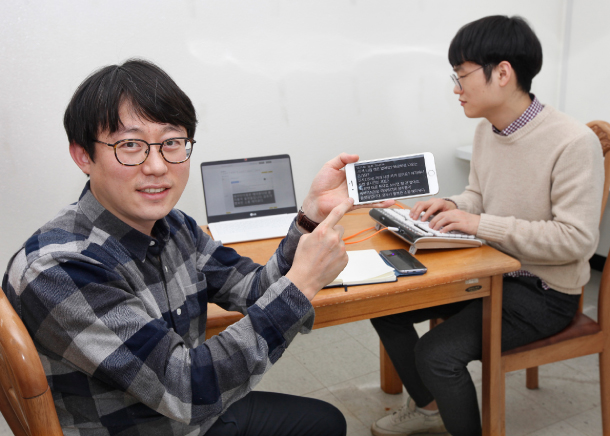 “We’ve learned that people with impairments don’t want to stand out. So, our job is to condense the technology and make it small enough to fit in normal sunglasses or glasses, an achievement that we featured at CES 2018,” Kim said at the showcase.

The most challenging thing was that the developers were not able to receive immediate consumer feedback and had to predict the impact of their work.

“Because of the difficulties, we’ve partnered with Chung-Ang University Hospital and succeeded in developing the technology to serve varying degrees of vision loss,” he said.

Users with Galaxy smartphones and a Gear VR headset can download the app now.

A start-up called Dot makes a smart watch for people with a visual impairment. With 36 mechanical dots on the watch’s surface, the device can tell the time and set alarms using braille. 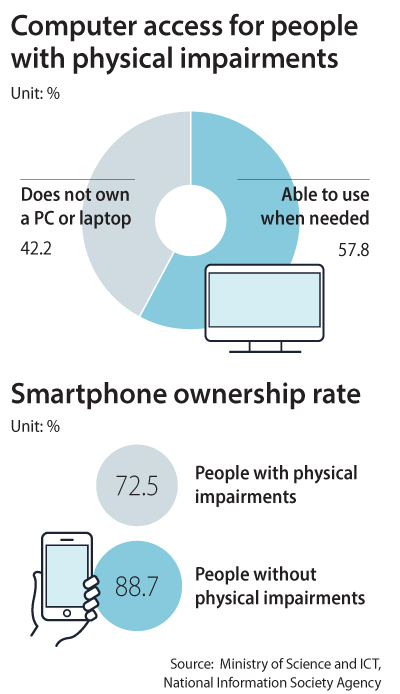 Aiding the hard of hearing

Engaging in a public forum may not require much effort for many people, but it used to be impossible for Park Jin-ha, a 31 year-old woman with severe hearing loss.

In a one-on-one encounter, Kim can keep the conversation going by reading lips and gestures. The conference hall setting, however, makes the speaker’s voice and their lips and body language much tougher to read.

But ever since she enrolled with a real-time captioning service called Sharetyping, Kim has been able to attend public lectures on economic issues.

Park Won-jin, head of assistive technology start-up AUD behind the Sharetyping platform, believes that the technology can play an integral role in aiding users with hearing and visual impairments. As a hard of hearing person himself, Park strived to let those with hearing problems blend in and attend any events they wanted to.

“In Korea, 86 percent [of hearing impaired people] are hard of hearing, contrary to the widely held assumption that the vast majority are totally deaf,” Park said. “So, their main mode of communication is not solely sign language but various combinations of amplified hearing, assistive listening technology and captioning.”

The Sharetyping service converts audio content into text streamed to user’s smartphone, usually with a typist transcribing the text in real time.

AUD hopes to upgrade its service by integrating artificial intelligence through a partnership with SK C&C, an IT service affiliate of SK Group.

When SK’s AI engine Abril is added to Sharetyping, the captioning service will no longer need typists and subsequently ensure lower prices and better accessibility, according to Park.

Currently, the service for individual clients can cost as much as 70,000 won ($65.8) per hour, though the user will only ever pay 20,000 won thanks to donations and support given to AUD.

Others take a more medical approach to amplifying the residual sound ability of hearing impaired people. Todac produces cochlear implants, a surgically implanted electronic device that can help to provide a sense of sound to a person that is hard of hearing.

What differentiates Todac from other peers is that it adopted the manufacturing process of semiconductors into that of cochlear implants to allow for mass production and cheaper prices.

There are 53 companies in Korea that provide assistive devices for people with hearing, vision and intellectual impairments, according to the Korea Employment Agency for the Disabled, a state-funded body that helps people with impairments land jobs.

Despite the ingenious ideas and eye-catching partnerships, insiders say companies offering technology to assist people with physical impairments are still few and far between.

“Dozens of companies make devices for people with different physical and intellectual difficulties,” said Lee Ji-won, an executive director at Npoit Support Center. ”But few appear serious in embracing innovation and advanced technology to minimize the hassles facing them.”

Npoit is a non-profit organization dedicated to connecting start-ups and social enterprises with government agencies or big companies to work together on specific projects.

Releases of high-tech products designed for people with disabilities can sometimes sound insincere, especially when they come with a high price tag.

“Most assistive devices have higher prices than those made for able-bodied people,” said Hwang Seung-soo, an electric engineering professor at Handong Global University.

“But we need to remember that people with impairments often have a lower income level and many still don’t own computers and smartphones,” the professor said.

A survey by the Ministry of Science and ICT found that 42.2 percent of impaired people don’t own desktop computers or laptops, while nearly 30 percent don’t have smartphones.

Park Jong-pil, a manager responsible for handling devices for people with impairments at the Korea Employment Agency for the Disabled, noted that companies find it hard to stay afloat because of the lack of demand.

“We’ve heard that they face hardships because the lack of demand often causes challenges in manufacturing the devices,” Park said. “So we think partnerships with big companies and creating new sources of demand will be important.”

Lee, however, pointed out that many manufacturers are still far from coming to terms with what people with physical impairments actually want.

“The products [for impaired people] are ugly, garish and cumbersome, a factor that turns consumers away,” she said, “So, the makers need to spend enough time actually researching the lives and opinions of impaired people.”