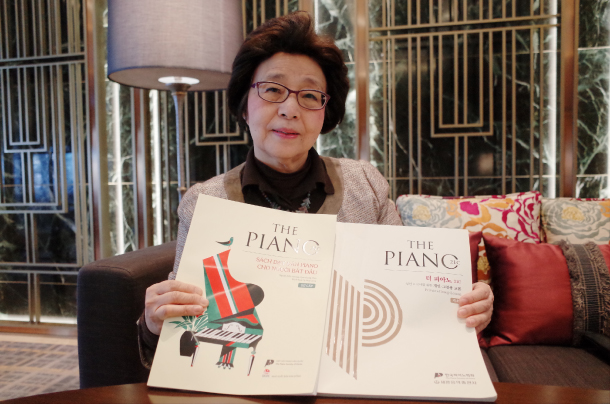 A piano lesson book written by concert pianist Chang Hae-won together with the Piano Association of Korea, first published in Korean and English, has recently been translated into Vietnamese. [YIM SEUNG-HYE]

This is a common question asked between people who have learned to play the piano in Korea.

“I could only finish the Bayer,” one may answer, a little embarrassed, while others can boastfully say, “I completed up to Czerny No. 50.”

When Koreans start learning the piano, especially at a young age, the majority of them start with beginner’s lesson books titled “Bayer.” Once they complete the first and the second Bayer, they can proceed to the next books - “Czerny No. 100,” “Czerny No. 30,” “Czerny No. 40” and, finally, “Czerny No. 50.” Completing all six books verifies that one can now read and play almost any music score. Although it seems like a very well-systemized learning procedure, Chang Hae-won, 79, one of Korea’s first concert pianists, says it’s an outdated practice that causes many young students to lose interest and abandon the instrument.

“This way of learning certainly improves technical skills of piano playing if you are persistent,” said Chang. “But it’s definitely not interesting.”

According to Chang, this common practice came from Japan about a hundred years ago.

“Japan moved on decades ago by rapidly developing and absorbing new learning techniques to make piano learning more fun,” she added. “Even if a student finishes the two Bayer books, he or she can’t play any music once the book is closed.”

That is why Chang, with the Piano Association of Korea, which she founded in 1990, put their heads together and, in 2016, published a beginner’s piano lesson book titled “The Piano 21C” for instructors.

“The lesson book focuses on [creating] a more fun piano learning experience by making it possible for learners, even on day one, to play together with the instructor,” Chang said. For example, Chang explains, if a student learns how to play from “Do” to “La” only using the right hand on the first day of the lesson, he or she can learn how to play a tune of “Arirang” (a traditional Korean folk song), and the instructor sitting beside can play the accompaniment.

“The book has been designed that way so that beginners can be amazed at the tune he or she has created together with the teacher from day one,” Chang said.

The most difficult part, she says, was selecting the 130 songs for the book.

“Because we have to pick out songs that can be played by beginners who only know certain scales, it was very difficult to find them. But once the student learns more notes and scales, selecting suitable music becomes easier.”

“The Piano 21C” is bilingual - instructions and explanations are written in both Korean and English to appeal to an international audience.

Moreover, Chang has intentionally included many popular songs as well as various traditional folk songs from not only Korea, but also from 10 other Asian countries so that students around the world can have fun being able to play tunes familiar to them. Thanks to the Vietnamese songs found in the book, it was translated and published in Vietnam last December.

“I think the Vietnamese publishers liked the fact that there are four Vietnamese folk songs and some popular songs that are familiar to their ears,” Chang said. Usually it takes about four to five years for a piano book to be translated and published in a foreign country, but thanks to the friendly relationship between Korea and Vietnam, Chang says it only took “The Piano 21C” three months to be distributed there.

This year, the second book, meant for intermediate students, will be released.

“So far, piano lessons in Korea have been too focused on creating elite musicians from young students, such as having one-on-one private lessons, focusing on memorizing the scales and brushing up on techniques,” Chang said. “It’s suitable for those who want to take up piano as a career but not for the rest who simply want to learn music.”

Chang’s goal, before she turns 80 next year, is to have her lesson book disseminated across the country. One of the strategies, therefore, is educating instructors on how to use the book and giving out teaching certificates to those who complete the course. Many colleges and further education institutes have adopted the book to foster piano instructors. Chang and other retired pianists at the Piano Association of Korea also launched a program using the piano book for young Korean soldiers in military camps who are interested in music by donating two pianos to each camp.

“We completed the program at two camps in Yanggu in Gangwon,” Chang said. “We signed a memorandum of understanding (MoU) with a piano hagwon (an after school academy) in the area to temporarily hired, discharged soldiers with Piano 21C certificates.

“We want people to know there’s fun in learning piano,” said Chang, “and the best way to do that is being able to play together and create harmony with the music you know and like, even if you are a beginner.”