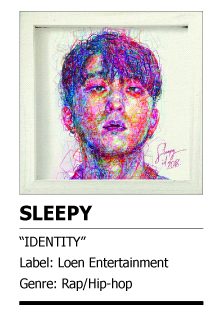 This album is getting special attention for its collaborations with artists like GRAY, Don Mills and Bang Yong-guk.

For the lead single “iD,” Sleepy worked with producer GRAY for a hip-hop number about a man who falls in love with a woman at first sight through social media. The music video of the song features friends of Sleepy- rapper DinDin and LE of girl group EXID.

Among all of the positive feedback from listeners, some have credited the song’s success to producer GRAY’s “magic” touch. Whether thanks to Sleepy’s soulful voice or GRAY’s production, the song is well liked by fans and new listeners alike.

“IDENTITY” is a special album with songs that highlight the rapper’s own story and shows his passion and love for music.