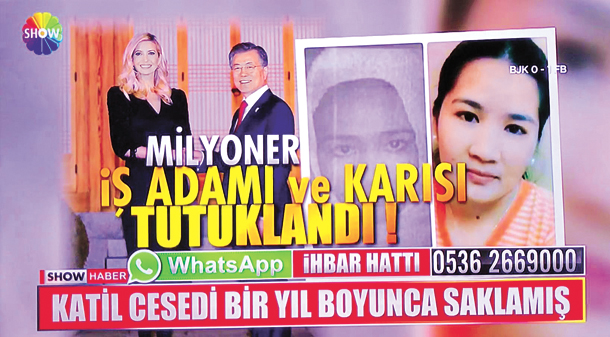 Turkey’s Show TV apologized Sunday for a gaffe in a news program that described a photo of South Korean President Moon Jae-in and U.S. President Donald Trump’s daughter Ivanka Trump as a millionaire couple in Kuwait suspected of murdering their Philippine maid.

“We hereby apologize to Korea and Korean President Moon Jae-in,” said anchor Pinar Erbas on Show TV’s news show Sunday. “We have conveyed our apology through a written statement before, but we apologize once again here. We have mistakenly used the president’s photo in our news program. It was not intentional and we apologize to our brother country Korea and its president.”

A news bulletin aired Feb. 25 described a case in Kuwait in which a Philippine maid was murdered and her body parts kept inside a fridge for over a year. When describing the “millionaire businessman” suspect, the program aired a photo of Moon.

In reporting that the businessman and his wife were captured, the show aired a photo of Moon with Ivanka Trump during her visit to Korea last month.

Photos of Moon are reported to have appeared eight times during the 1.5-minute report.

The Korean Embassy in Turkey immediately requested the program remove the report from its website and issue an apology.

The company deleted the report on March 5 and sent a written apology to the Korean government.

“We emphasized that a public apology on TV is needed,” said the Korean Foreign Ministry in its statement Monday. “And it was on Sunday that Show TV released its apology on the air, which was for 24 seconds of the program.”

Turkey and Korea call each other “brother countries” because of the Turkish participation in the Korean War. Turkey sent 15,000 soldiers to Korea during the war, the fourth largest number after the United States, U.K. and Canada.