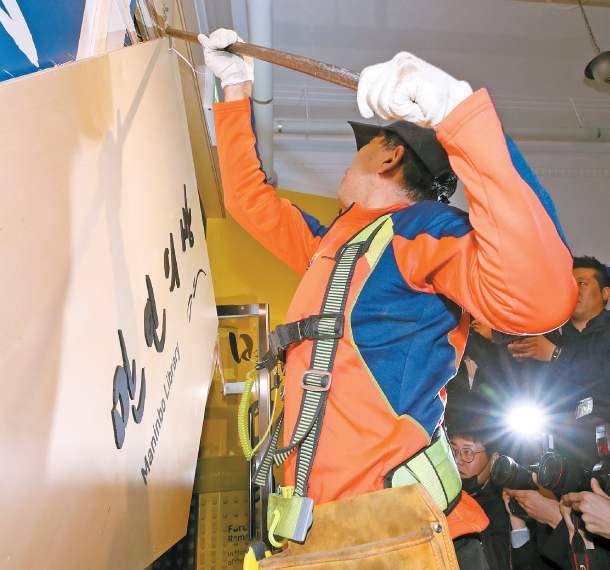 Workers remove a tribute to poet Ko Un from Seoul Metropolitan Library next to Seoul City Hall on Monday. [YONHAP]

Seoul’s city government removed Monday a tribute to Ko Un, a perennial Korean candidate for the Nobel Prize in Literature, after the poet was accused by several women of sexually harassing them. A library next to Seoul City Hall had dedicated a corner to the works and personal properties of Ko.

“Since Ko has been embroiled in the scandal, the library decided it couldn’t continue using that space to honor him,” said Lee Jeong-soo, director of the library. “We will be using the space for what it was before, an exhibit highlighting the history of Seoul Plaza.”

The corner, decorated with illustrations from Ko’s “Ten Thousand Lives,” known in Korean as “Maninbo,” was established as a tribute to both Ko and to commemorate next year’s 100th anniversary of the March 1st Movement against Japanese colonial rule. It opened on the third floor of the Seoul Metropolitan Library on Nov. 21.

Ko, 84, has been repeatedly accused of sexual misconduct, though he has denied the allegations.

After poet Choi Young-mi accused Ko last month of sexually harassing her years ago, Ko wrote a statement to the British newspaper the Guardian, saying, “I regret that my name has been brought up in the recent allegations. I have already expressed regret for any unintended pain that my behavior may have caused. However, I flatly deny charges of habitual misconduct that some individuals have brought up against me.”

Another poet, Park Jin-sung, uploaded a Facebook post on March 5 saying that Ko pulled down his pants and shook his genitals at a younger woman in 2008.

Many politicians and high-profile figures in entertainment have been embroiled in Korea’s Me Too movement, which took off in late January after Seo Ji-hyeon, a prosecutor, went public to say she was groped by a superior.

In addition to Ko, Lee Youn-taek, a 66-year-old renowned playwright and producer, was accused of raping and sexually harassing several actresses over the past decades. Bae Bien-u, a prestigious photographer, cartoonist Park Jae-dong and actors Jo Min-ki, Oh Dal-su and Cho Jae-hyun are among those accused of sexual misconduct. Jo committed suicide Friday, three days before he was to be grilled by police.

Across the country, there have been attempts to erase tributes to artists and high-profile figures accused of sexual misconduct. The Ministry of Education said local publishers have decided to remove from middle and high school textbooks most content related to Ko, Lee and Oh Tae-sok.

The South Chungcheong Provincial Government removed photos of its former Gov. An Hee-jung, who has been accused of raping his former secretary, on its website and also in offices in the government complex. Gijang County Office in Busan canceled a contract with Andersen Theater, which has ties with Lee.

Authorities are also investigating the accused. Police on Sunday raided the home and studios of Lee Youn-taek to investigate if Lee had abused his power to sexually assault members of his theater group.