Team Kim has stepped back from the endless circus of media appearances and product endorsements, heading to a rural temple to mentally prepare for next week’s Ford World Women’s Curling Championship 2018. 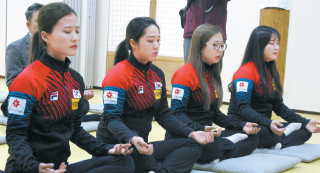 The Korean women’s curling team unintentionally stole the show at the 2018 PyeongChang Winter Olympics, winning both a silver medal and the support of fans around the world.

The team’s achievements on the curling sheet, along with charismatic skip Kim Eun-jung’s emphatic game face and the player’s team spirit and down-to-earth demeanor, turned out to be the perfect recipe for viral stardom.

They may have gone into the Games virtually unknown, but now that the Olympics is over the members of Team Kim are busier than any other athletes, quickly becoming the face of Lotte Foods’ Uiseong Garlic Ham and LG Electronics’ CordZero wireless vacuum cleaners.

In fact the team’s popularity has grown so much that even appearing in public has become a daunting task.

“I wear a mask because I have a cold but people still recognize me from my eyebrows,” admitted Kim Yeong-mi.

However, Team Kim has decided to put aside their whirlwind schedule of public events to stay at a temple and mentally prepare for the upcoming world championship.

“[They went to the temple] to remember how it felt six years ago [when they failed to qualify for the Sochi Olympics],” said Kim Kyung-doo, head of Gyeongbuk Uiseong Curling Training Center and Coach Kim Min-jung’s father.

Skip Kim Eun-jung considered quitting the sport after the team failed to qualify for the 2014 Sochi Games.

“My emotions get very inconsistent when I started to get obsessed about winning, but meditation allowed me [to control my emotions],” said Kim Eun-jung.

Only Coach Kim Min-jung and Kim Eun-jung are Buddhist, but the other athletes still find that the opportunity to meditate benefits their game.

From March 17 to 25, Team Kim will compete at the Ford Women’s Curling Championship 2018, their first major tournament after the PyeongChang Olympics. The Korean squad hopes to continue their success and improve on their sixth place finish last year.

“I am worried that the popularity of curling will fade away if we play badly at the world championship,” Kim Eun-jung said. “We’ll work harder to make curling gain more popularity. We came to a mutual understanding that we want to compete at the 2022 Beijing Winter Olympics.”

The world championship is likely to be especially difficult as Sweden’s Team Hasselborg, who won gold in PyeongChang, and Canada’s Team Jones, who won gold at the 2014 Sochi Olympics, are both competing. The field has also been widened to 13 teams, offering more of a challenge. Both Canada and Japan will enter the tournament with a different team to the Olympics.

Korea will start the world championship against Germany at North Bay Memorial Gardens in Canada on March 17.