The Korean ice hockey team greets the fans after its game against the United States at the Gangneung Hockey Centre in Gangwon on Tuesday. [YONHAP]

The Korean para-ice hockey team concluded the preliminary round on the Paralympic tournament in second place in their group after losing to the United States 8-0 at Gangneung Hockey Centre in Gangwon on Tuesday. The team is still guaranteed a spot in the semifinals. 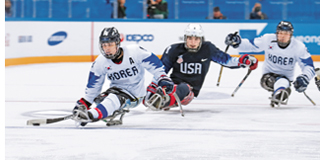 The Korean para-ice hockey team, in white, competes for the puck during its preliminary round game against the United States at Gangneung Hockey Centre in Gangwon on Tuesday. [YONHAP]

Korea finished the preliminary round with a record of two wins and one loss, four points behind the United States. After finishing second in the group, Korea will play its semifinal game against top-ranked Canada at noon tomorrow. The winner of the game will play in the gold medal game against either the United States or Italy. The two losing teams will compete in the bronze medal match.

Though Korea was the first team to guarantee its spot in the semifinals from Group B, the United States was always going to be a challenge. The United States has won three gold medals in para-ice hockey - at the 2002 Salt Lake City Games, 2010 Vancouver Games and 2014 Sochi Games.

Prior to its game against Korea, the United States had already won its other two preliminary games, against Japan and the Czech Republic. Both games ended 10-0.

The trouble started early, with Brody Roybal scoring a goal for the United States after just four minutes. Declan Farmer and Joshua Misiewicz were quick to follow up on Roybal’s success, with Farmer netting three goals and Misiewicz scoring two.

Things calmed down in the second period, with Korea holding off the U.S. onslaught but failing to make any opportunities of their own. Despite a scoreless second, Korea once again allowed goals to Travis Dodson and Roybal in the third, finishing the game with the score at 8-0.

Team U.S.A. played consistently throughout the game, with almost military-like precision. This comes as no surprise as six of the 18 players are veterans. Misiewicz, Dodson, Ralph Dequebec, Rico Roman, Luke McDermott and Jen Lee were all in the military. Roman and Lee were in the army while the other four were marines. Aside from Lee, who lost his leg from a motorcycle accident, the other veterans were injured while serving abroad.

Roman and Dodson lost both their legs in 2007 during the Iraq war from an explosion while McDermott and Misiewicz lost their legs while serving in Afghanistan. Dequebec was injured in 2012 and lost both his legs and parts of his fingers.

For all six players, para-ice hockey offered a chance to start to cope with the aftermath of their injuries. Through the U.S. Olympics Committee’s Paralympic Military Program, over 2,000 athletes were able to take on new challenges and some were given the opportunity to compete in international competitions. At the 2016 Rio Paralympics, 35 athletes were veterans.

The six “American heroes” in the para-ice hockey team started the sport through the program and are play for clubs now. Roman, who is competing at his second Winter Paralympic Games, said ice hockey, where athletes compete aggressively on the ice and protect each other, reminds him of the comradery in the military.

Despite a big loss, Korea’s record in the preliminary round is already a great success, as this is the first time the country has advanced to the semifinals in Paralympic history.

At the 2010 Vancouver Paralympic Games, Korea finished sixth. Though Korea defeated Russia in the first game at Sochi, they still finished seventh, losing to Canada and Italy in the preliminary round.

Despite a disappointing finish at Sochi, Korea is confident that it can medal this time. They may not be good enough to beat the top ranked teams - Canada and the United States - yet over the last four years the team has improved significantly, taking bronze at the 2017 World Para Ice Hockey Championships.