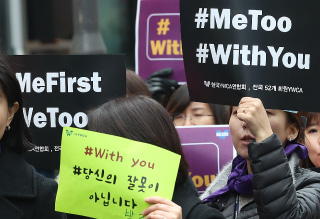 The courage of victims has exposed the bare face of ugly desire and foul truths hidden under the brazen faces of the powerful. Sexual abuse has been variably sold as the eccentric behavior of a genius, an act tapping into dormant passion, the price people pay to get ahead and the cost of being with someone the victim admired. In many cases, assaults have been labeled as mistakes made under the influence of alcohol.

It is an age-old disgrace in human history, in all times and places. The latest movement, Me Too, has exposed cases of sexual assault and harassment just as people have become increasingly sensitive toward such behavior.

Times have changed, and only foolish men do not realize it. The scandals are considered shocking, but the issues often take the wrong direction.

The most dangerous thing in the world is a half-truth. Georg Lichtenberg, the 18th-century satirist, once quipped, “It rained so hard the pigs got clean and the people dirty.”

Sex has become a tool for the powerful, but the essence of the Me Too movement is not sex; it is power. Victims are exposing not just sexual abuse but power abuse.

This is what distinguishes the Me Too cases from simple sex crimes. “I’ve never heard of a male aide sexually harassing a female lawmaker he worked for,” said one party official, “but it happened the other way around.” It was not made public, but a female lawmaker of the ruling party in the 18th National Assembly reportedly touched the thighs of her male aides and male journalists.

The sexual abuse in Me Too cases runs vertically. It is not between men and women, but between the powerful and powerless. That’s why men’s repentant “Me First” movement is getting little support. Powerless men will advocate “Me First,” but power abuse does not end.

Just as not everyone with a sex drive is sexually violent, not everyone with power abuses it. Many powerful men and women refrain from the temptation of abusing their positions, and most people with sex drives do not express it everywhere and with everyone.

The targets of Me Too are those with power, but the error of generalizing a population based on scandals and revelations only makes the fundamental solution to the problem more difficult, if not impossible.

The crimes of sexual assault perpetrators must not be limited to what’s been exposed. I cannot believe that these power-driven criminals must have been fair and sincere to subordinates outside the sexual misconduct.

There must have been more cases of power abuse behind every sex crime. The eccentricities, the dormant passion, the price to get ahead — surely they must not have only manifested themselves in the form of sex. Power abuse is so frequent that it is taken for granted.

It is only natural to prioritize sex crimes because they are shocking and devastate victims. But we should not stop here. Me Too must expand to the level where we can reject the power abuse that stands at the heart of sexual abuse. Only then will we be able to heal the victims and bring about a true revolution in gender relations.

Will it be possible? Bertrand Russell once said, “The trouble with the world is that the stupid are cocksure and the intelligent are full of doubt.”