A lasting impression is what Muoki aims for

A lasting impression is what Muoki aims for 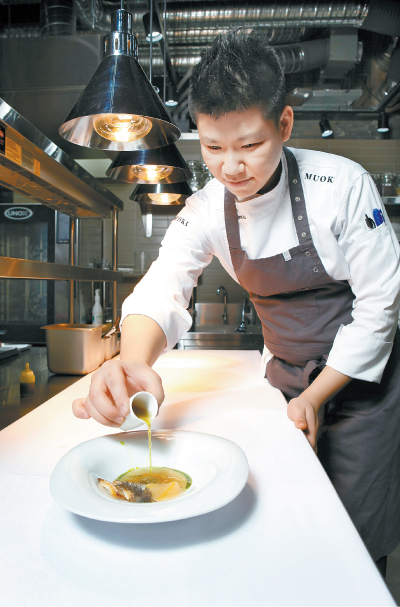 Your hands won’t be empty after enjoying a meal at restaurant Muoki, as executive chef James Park will hand you a pack of two cookies in a clear plastic bag on your way out. He will also be sure to say goodbye as you step into the elevator which opens right to the hall of the restaurant. Giving his customers a way to remember the restaurant after they leave is of the upmost importance to Park.

“It’s like making a communications network,” said Park who tries to make in-person contact with each of his customers after communicating with them through his work on the plate. “Talking to customers who I didn’t get to spend too much time conversing with while I cook is a thing I want to do so that they can continue to think about the restaurant as they walk out and eat cookies, and possibly think about making another trip back to the restaurant soon.”

Delicious food is not as charming without individualized service, Park believes. 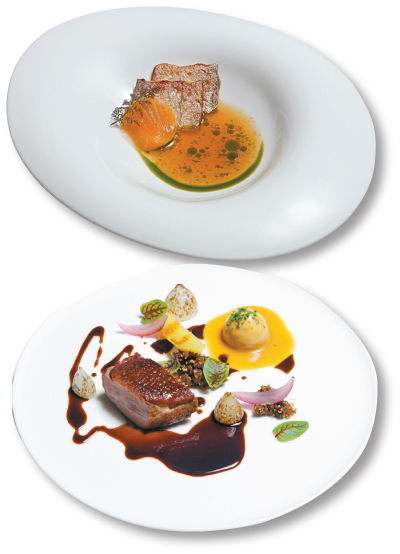 Ever since he himself was sent off at a restaurant with its staff bowing until the doors of the elevators had closed, he has aimed to create a similar dining experience for his customers. For Park, restaurants should pursue all-inclusive service, which of course, starts off with tasty dishes. 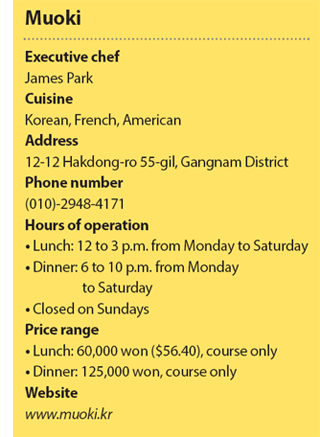 The extra details he adds in order to differentiate him from other restaurant owners and chefs wouldn’t have happened if he was not confident that he could be versatile in making food that is appealing for each and every diner. While working at a restaurant in South Africa for five years, Park dealt with a wide variety of meats in the kitchen - from deer to buffalo.

He then fulfilled his desire to use more seafood in his cooking at a French restaurant and led a food lab attached to a restaurant on Jeju Island for about a year.

Before joining Havichi Hotel and Resort in Jeju in 2015, he was part of the staff that opened the globally famous The Test Kitchen in Cape Town. He started out at the bottom tier of about 20 chefs, but over the course of five years spent there, he shot up to become the No. 2 chef in the kitchen.

With limited access to a variety of ingredients while in Africa, his interest in nature grew exponentially, especially for trees, as it was used by local people to cook their food outdoors and was also where many local animals reside. Muoki, the name of his restaurant, means oak tree in a South African dialect.

Although there are not any staples similar to gochujang or doenjang that are representative of South African cuisine in Park’s kitchen, the way he handles his meat comes from his time spent there. If there was a market for pigeon or horse meat in Korea, he would try to use them more, but, since many meat choices are not available from butchers or wanted by diners here, he uses more classic dishes with a bit of a tweak for younger diners looking for creative stories behind the dish or a plate design that is social media friendly.

“Anything classic tastes good,” said Park, “and I look for taste in something classical but I express such [taste] in a more modern way.”

“I have learned how to keep a balance between sticking to my beliefs while catching up with the trends.”

What’s more evidently shown on his plates is his time spent in Jeju. He has made his own version of cutlass fish soup, a distinctly Jeju-style cuisine that wasn’t widely enjoyed elsewhere in the country. Since cutlass fish is usually served grilled instead of being put in a soup, the presentation was classic, yet different enough for Seoulites.

Another dish he calls “Night of the Sea” was inspired by his time spent looking out onto the sea at night by the Pacific Ocean at his former kitchen.

Big fin squid was used to show how sea creatures live underwater, with a cream-based sauce symbolizing waves. A white radish is cut into a shape of crescent moon to make the diners feel like they can sit there and look at the moon as if they are by the shore.

“During my time spent in Jeju, I had a ocean view right outside of my window, heard the waves breaking when I woke up, and could drive for five minutes and be deep in the forest,” said Park.

“It made me think I could come up with thousands of ideas for dishes, and taught me I could create a menu based on inspirations from the scenery and nature, not only with a choice of ingredients available. It opened my eyes.”

Now that he is in Seoul, with many available ingredients from farmers, butchers and foragers across the nation, he focuses on delving into one ingredient at a time, just like he did with meat in South Africa and with fish in Jeju. For a dessert made with tangerine, he doesn’t just stop at making a sorbet or a cake. He tried frying and boiling, and now presents a dish made using seven different methods.

“The ultimate idea is to use an item a lot until one can see the potential each and every ingredient has,” said Park.