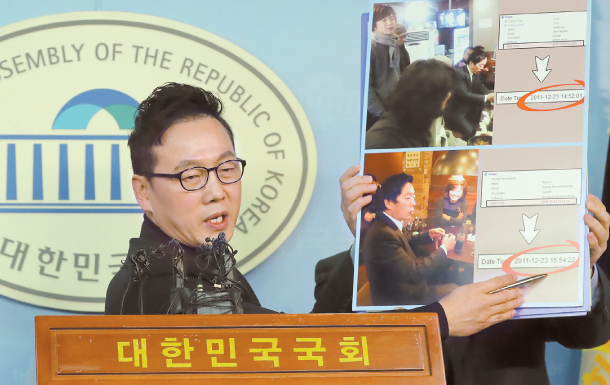 Chung Bong-ju has a press conference in the National Assembly on Monday to refute a sexual misconduct charge against him. [YONHAP]

A former left-leaning lawmaker who is running for Seoul mayor sued six local reporters Tuesday for disseminating what he claimed to be false rumors that he hugged and attempted to kiss a college student in 2011.

Chung Bong-ju, who served as a lawmaker in the predecessor of the ruling Democratic Party from 2004 to 2008, filed a criminal lawsuit with the Seoul Central District Prosecutors’ Office against journalists in Pressian, an online newspaper that initially broke the story last Wednesday, as well as The Hankyoreh and JoongAng Ilbo, which each followed up with original reporting.

The victim in the Pressian article will not be sued for now, Chung’s attorney told reporters as he and the ex-lawmaker arrived at the prosecutors’ office, because it was “hard to tell exactly who she was” from the Pressian report.

“It just wouldn’t be right” to sue her, said Kim Pil-seong, the attorney. “The real problem is that the media isn’t doing any fact-checking.”

Asked whether the Pressian report was false, Kim replied that it was “basically” all fake. As to whether any detail was true, he added, “No. It’s all basically fake.”

Last Wednesday morning, just hours before Chung was about to announce his bid to run for Seoul mayor in June, the online progressive newspaper cited a local reporter as saying she was hugged and almost kissed by Chung on Dec. 23, 2011, in a private room at a coffee shop in Kensington Hotel in Yeouido, western Seoul. The reporter, whose identity was withheld, said she was a college student at the time, and first met Chung in November 2011 at an event on a college campus, where he gave a lecture.

The reporter said she approached him after the lecture and that he gave her his business card. The two kept in touch for a while afterward, until she realized their relationship was headed in the wrong direction. Chung, according to the reporter, kept texting her to ask, “What are you doing” and “Are you busy?”

Chung, 57 and married with two kids, adamantly denied the accusations in a press release last Friday and during a press conference on Monday at the National Assembly, calling the Pressian report a “public scam.”

He added, “Whether on Dec. 23, 2011, or Dec. 24, I never met her or harassed her… She and the [Pressian] reporter who broke the story are friends from college, and I only met them two to three times at a gathering for ‘Naneun Ggomsuda’ fans.”

Pressian admitted on Monday that the reporter and writer of the original story were college friends, but denied lying about the sexual assault. The paper cited an avid supporter of Chung, a member in Chung’s fan club who reportedly accompanied him from Dec. 22 to 26, 2011, at all hours of the day except when he slept, as saying he was asked by Chung to drop him off at Kensington Hotel on Dec. 23.

Chung, at the time, said he had an “important meeting” to attend, said the supporter, who added that he stayed around for about 30 to 40 minutes that day without knowing for sure who Chung was meeting.

Chung said Tuesday he will still run in the Seoul mayoral race.