Moon gets draft of constitutional changes

Moon gets draft of constitutional changes 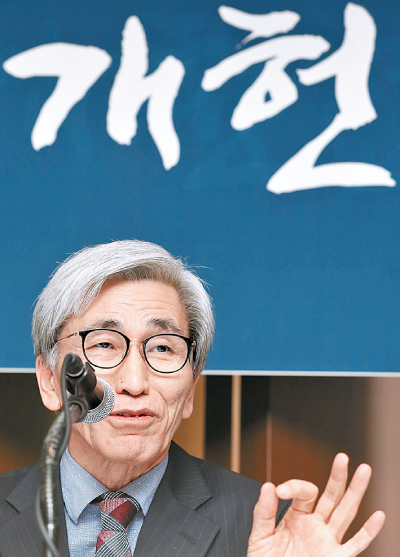 Jung Hae-gu, head of a special committee on constitutional changes, explains a draft of a constitutional amendment to reporters at the Korea Press Center in Seoul on Tuesday. [YONHAP]

President Moon Jae-in made a case for a four-year presidential term with the possibility of re-election Tuesday as an advisory panel briefed him about a draft proposal for constitutional amendments.

“If the four-year presidential system with a possibility of re-election for a second consecutive term is selected, the presidential term will almost match the term of local governments, so starting in the next term, the president and local government heads can have corresponding tenures,” Moon said when Jung Hae-gu, head of the special public advisory committee on the constitution, briefed him about proposed amendments.

After Moon ordered the government to prepare an amendment bill, the special committee was launched on Feb. 13 and finalized its draft on Monday. It reported to Moon on Tuesday.

Moon has been a strong advocate of constitutional change, stressing the need to update the 30-year-old document to expand basic rights and make other changes. Earlier this year, Moon proposed a national referendum on amending the Constitution on June 13, when the nation holds local elections. He warned the National Assembly that his administration would draft a bill if lawmakers do not by March.

Moon defended Tuesday his plan to hold the referendum in June by stressing the importance of streamlining the country’s political calendar. According to Blue House spokesman Kim Eui-kyeom, Moon said aligning the presidential term with those of local government heads is only possible with his proposed timing. “How can we ever find another time when the two tenures begin around the same time?” Kim quoted Moon as saying.

Moon gave a specific example with his own presidency. “I will have three nationwide elections during my term, and it is an enormous waste of national resources,” he said. “If we change the constitution, there will be two nationwide elections, and the president and local governments will start their terms at the same time. General elections will serve as a mid-term evaluation.”

During a luncheon with members of the special advisory committee Tuesday, Moon said the idea of a four-year presidential term with a possibility of re-election has not been actively explored because the legislature’s discussions were focused on other governing systems such as a parliamentary system.

Even if a new presidential system with the possibility of a second term is introduced, Moon will not be covered by the change, a presidential aide said.

Moon said that the referendum must take place in June and he will not hesitate to use his power to introduce his bill if lawmakers fail to act in time. “Holding the referendum in time with June local elections was a pledge made by all parties and candidates,” Moon said. “It is extremely unfortunate that the National Assembly failed to follow up with the promise.”

Moon said lawmakers were given more than enough time to consider amendments over the past year, but no progress was made. “Furthermore, they are criticizing my preparation for amendments to keep my promise with the public,” Moon said. “This is not a responsible political attitude.”

He warned that he will not allow disagreements over constitutional change to get in the way of other urgent issues concerning national security and people’s livelihoods. “If the National Assembly wants to lead the amendment, it must act, not just talk,” Moon said.

While promising to finalize his bill soon, Moon also urged the National Assembly to present a bill of its own as soon as possible. “It is not too late. If they have the will, we can find common ground,” Moon said. “If they let this last opportunity slip by, I will inevitably exercise my right, bestowed by the constitution, to propose the amendment.”

In addition to changing the current single, five-year-term presidency to a four-year presidential term with the possibility of re-election for a second consecutive term, the advisory committee’s draft included changes in presidential elections, including runoff voting in an election in which no candidate wins a majority. The committee also recommended the introduction of a recall election system for lawmakers and establishment of a new clause governing the definition of Korea’s capital city.

A proposal was also made to include mentions of democratization movements in Korea’s history in the preamble of the constitution.

Moon will finalize his bill based on the committee’s proposals and submit it to the legislature on March 21, a senior Blue House official said Tuesday. “In order to guarantee the legislature the mandatory 60 days of review, that is the deadline,” he said.

Passage requires two-thirds or more support by the legislature. As of now, the National Assembly has 293 sitting members and Moon needs 196 votes to pass the bill. If all 116 members of the main opposition Liberty Korea Party oppose, passage is impossible.

Some speculated that Moon’s bill would not include contentious changes, such as the introduction of a new presidential term. A national referendum will take place no later than 30 days after a bill’s passage. A majority vote finalizes the amendment and the changes take effect immediately.