Athletes return to North after end of final race

Athletes return to North after end of final race 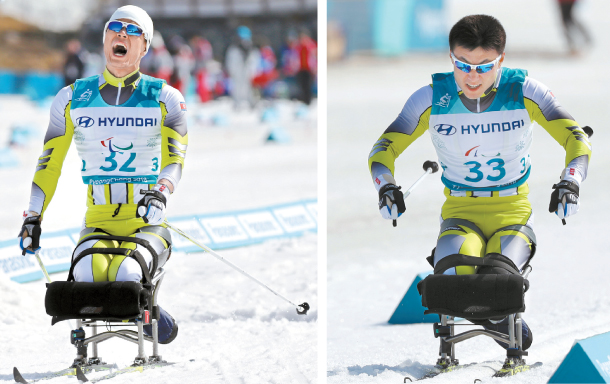 North Korean athletes finished their last event at the PyeongChang Winter Paralympics in South Korea on Wednesday before they return home.

Ma Yu-chol and Kim Jong-hyon competed in the men’s 1.1-kilometer sprint cross-country skiing event in the sitting category at the PyeongChang Winter Paralympics. Ma and Kim finished 31st and 32nd respectively among 36 competitors.

Ma clocked in at 3 minutes and 59.48 seconds, while Kim had a time of 4 minutes and 23.87 seconds, which was more than a minute behind the top qualifier Maksym Yarovyi of Ukraine. Their performance was watched by South Korean President Moon Jae-in and his wife Kim Jung-sook, who visited Alpensia Biathlon Centre in Pyeongchang County, Gangwon.

In the men’s sprint event, the top 12 performers from the qualifying round advance to the next stage. South Korea’s Sin Eui-hyun reached the semifinals by finishing eighth in the qualifying stage.

This was their second and last competition at the PyeongChang Paralympics. The two sit-skiers previously competed in the men’s 15-kilometer sitting cross-country skiing event on Sunday, taking the bottom two spots among 27 contestants who finished the race.

Although their competition results were not impressive, Ma and Kim already made history as they became the first two North Koreans to compete at the Winter Paralympics. Before PyeongChang 2018, North Korea had only appeared at two Summer Paralympics: London 2012 and Rio de Janeiro 2016.

Ma and Kim were able to participate in the 12th Winter Paralympics after the International Paralympic Committee gave a special invitation to North Korea.

North Korea sent a 24-member delegation with six athletes to PyeongChang, but excluding Kim and Ma, the four other athletes came as observers.

North Korea’s athletic delegation is scheduled to return home Thursday. Initially, four officials from the North’s Paralympic Committee, including Kim Mun-chol, the head of the Korean Federation for the Protection of the Disabled, were expected to stay through the end and attend the closing ceremony on Sunday. But unification ministry officials in Seoul said all those four officials will also leave PyeongChang on Thursday.

Kim, 17, is a student at Kim Il Sung University in Pyongyang and was the flagbearer for North Korea at the opening ceremony of the PyeongChang Paralympics. Ma, 27, visited South Korea to compete in table tennis at the 2014 Asian Para Games in Incheon. At the opening ceremony on Friday, he carried the Paralympic torch together with South Korean para skier Choi Bo-gue.

Ma and Kim started cross-country skiing in December 2017. Both suffered impairments to their lower limbs in car accidents.