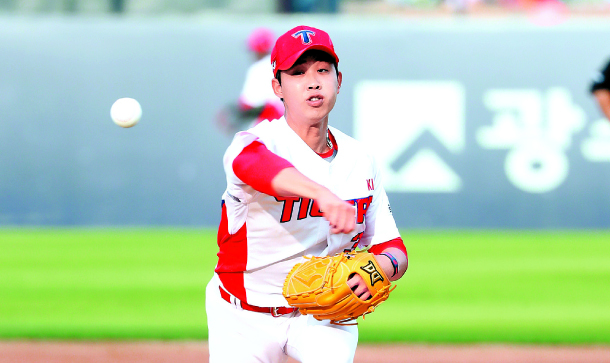 Right-hander Im Gi-yeong enjoyed a breakout season in 2017 for the Kia Tigers, helping them win the Korea Baseball Organization (KBO) championship as their No. 4 starting pitcher.

His hopes of picking things up right where he left off to begin 2018 have been derailed, however, as he came down with some shoulder pains during spring training last month. Im has yet to pitch in a live game this spring, with the start of the regular season 10 days away, but the 24-year-old said he is in no hurry.

“I feel pretty good now, but if I start feeling pains again, I have to do my rehab all over again,” Im said Tuesday before the Tigers’ first preseason game at Gwangju-Kia Champions Field in Gwangju. “Once I return to the mound, the most important thing is I won’t go back on the shelf.”

Im went 8-6 in 23 appearances last year with a 3.65 ERA. He also tossed two complete game shutouts, both of them coming in the first half, and carried a sparkling 1.72 ERA and a 7-2 record into the All-Star break.

Im had a light throwing session Tuesday. He was scheduled to make about 30 pitches, but he felt so great that he ended up throwing 45 pitches.

“I felt like I could take the mound and pitch in a game right away,” he said. “But the season hasn’t even started. I will take the long view.”

And on top of those regular season innings, Im was on the mound for five and two-thirds innings in Game 4 of the Korean Series, and threw seven more innings for the Korean national team at the Asia Professional Baseball Championship in Tokyo.

Perhaps the sudden increase in the workload has led to shoulder pains this spring, though Im said he didn’t think there was any connection.

“I missed some time last year with pneumonia, and when I returned, my mechanics were a bit off,” he said. “And I pushed myself too hard when I tried to correct them. I’ve studied videos from last year when I was pitching well, and I think I’ve returned to pitching the same way.”