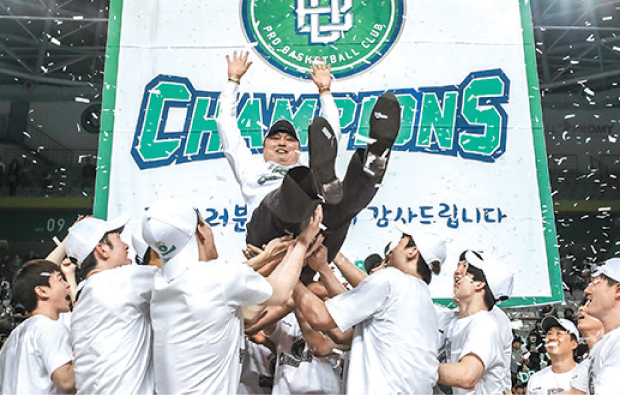 In his first year as head coach of the Wonju Dongbu Promy, Lee Sang-bum turned one of the weakest teams in Korean basketball into regular season champions. 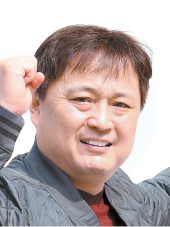 The Promy are entering the playoffs as the top team in the Korean Basketball League, and their win is considered one of the biggest upsets in recent history.

“I’m a lucky coach,” Lee said Monday after the team secured the season title. “We were able to win all thanks to the athletes who put in their hard work with no fear.”

Before joining the Promy in 2017, Lee coached the Anyang KGC from 2009 to 2014 and led the national basketball team during his final year with KGC. He then left for Japan, where he coached high school and college basketball until a representative from the Promy scouted him there.

“Through my experience in Japan, I realized that I needed to be a coach who believes he is on the same level as his athletes,” Lee said.

Last season, the Promy placed fifth out of 10 teams and did not renew its contract with Kim Young-man, the former coach who had been serving for three years, deciding it was time for a change.

The Promy sought out Lee, who is renowned for turning around poorly performing teams.

Under his aegis, the Anyang KGC went from seventh in the league in 2009 to season champions in 2013.

The Promy, though, offered a greater challenge. With the exception of Kim Joo-sung and Doo Kyung-min, no player on the team played for more than 10 minutes per game in the season before Lee took over. The club was missing its key player, Hur Woong, because he was serving in the military, and though they had a former MVP, Yoon Ho-young, who earned the award in 2012, he was still recovering from an injury.

“I expected us to be crawling in the bottom of the ranking for about one to two years,” Lee said.

Although the Promy started the season with an early lead, they struggled toward the end. Doo’s performance in particular was a bit shaky. During the Promy’s game against the Ulsan Hyundai Mobis Phoebus on Feb. 10, Doo only scored one point throughout his 19 minutes of playing time. “It was my fault for mistaking him for an ace player,” Lee said after Doo’s disappointing play.

Despite the controversy, Lee said they have made amends, and Doo even won the MVP award. “Anyone can make a mistake,” Lee said. “Through this incident, Doo has matured a lot.”

When the Promy lost to the Changwon LG Sakers on March 3, instead of becoming angry with the team, Lee apologized to the players. “We lost because of me,” he told them.

“Taking responsibility for my wrongs is never something to be embarrassed about,” Lee said. “I have to be the first one to show that I’m brave so that the athletes will follow me.”

Lee was once the rebound king in the Korean Basketball League, but after seriously injuring his Achilles tendon in 2000, he retired from playing and spent a year in the United States learning how to coach.

“I wasn’t a star player,” he recalled. “I was average. I had a lot of good friends and got injured here and there. Instead of staying as an athlete for a long time, I decided that I wanted to become a coach.”

In his 10 years of coaching, Lee has been supervised by five head coaches.

“I only learned the good things from them,” Lee said. “During my time coaching for the national team, I thought of head coach Yoo Jae-hak as my lifelong mentor. I learned a great deal from our two-hour basketball conversations every day.”

The Promy took an early lead at the start of the season, winning the first five games. In the middle of the season, they won 13 consecutive games including against the Jeonju KCC Egis and Seoul SK Knights, who were tied for second in the league until the sixth round of the season.

“More than anybody else, Kim Joo-sung and Yoon Ho-young have helped maintain our focus,” Lee said. “They played the role of parents and were the driving force behind our win.”

As regular season champs, the Promy have secured their spot in the playoffs, which start on March 28.

“I’m worried about the team’s lack of experience in big games,” Lee said. “When I start thinking that we definitely have to win, I begin to act rash. As long as we can pull through the third quarter, I believe we can make one of the greatest upsets in the fourth quarter.”