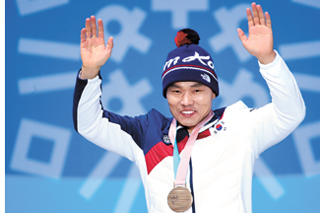 Sin Eui-hyun smiles with his bronze medal for the men’s 15-kilometer cross-country sitting event during an awards ceremony at the Medal Plaza in Pyeongchang County, Gangwon. [NEWS1]

Nordic skier Sin Eui-hyun and alpine skier Yang Jae-rim were among the six finalists for the Whang Youn Dai Achievement Award, the Games’ most prestigious award named after a Korean doctor who was diagnosed with polio at age three and worked for people with impairments. Whang dedicated her life to the development of paralympic sport in Korea and around the world. The International Paralympic Committee (IPC) established the award under her name in recognition of her contribution to the Paralympics.

“I feel proud as a Korean that such an award is given under the name of a woman in a small country,” Whang was quoted as saying on Yonhap. “The award came this far because I had a strong will that also endured the pain of polio. I hope the athletes can overcome their adversities with a mind that happy days will come.”

The award, which was established by the IPC at the 1988 Seoul Summer Paralympics, is given to two athletes - a male and a female - at the end of each Paralympic Games. It is presented to Paralympians who best exemplify the spirit of the Games and the Paralympic values. Until 2006, the award was called the “Whang Young Dai Overcome Prize.”


“The award honors Paralympians who see beyond their limitations and who have vision to change the world through sports and the Paralympic Games,” the IPC website explains.

While Kim remains the only Korean awardee to date, there are two Korean athletes named as possible recipients this year. 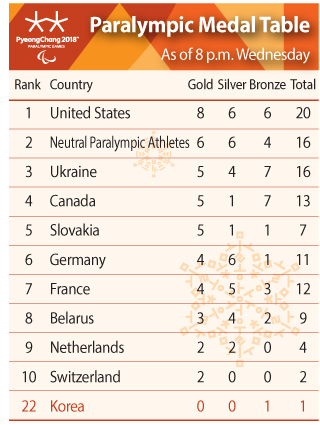 Sin, 37, won Korea’s first medal at the PyeongChang Winter Paralympics on Sunday after taking bronze in the men’s 15-kilometer sitting cross-country skiing event. He’ll vie for the award with Vitaliy Luk’yanenko, a visually-impaired Nordic skier from Ukraine, and Adam Hall, an alpine skier from New Zealand.

Snowboarder Bibian Mentel-Spee of the Netherlands was the female winner of the award while alpine skier Toby Kane of Australia was the male honoree at the 2014 Sochi Paralympic Games.

Most recently at the 2016 Summer Paralympic Games, Tatyana McFadden of the United States, competing in wheelchair track and field, and swimmer Ibrahim Al Hussein of Syria took home the prize.

The IPC said the winners will be announced today.