What does Xi really want?

What does Xi really want? 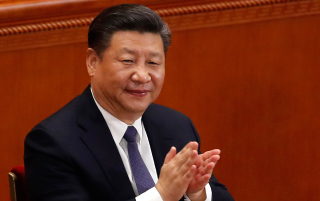 Chinese President Xi Jinping applauds after hearing the results of a vote on a constitutional amendment during a plenary session of China’s National People’s Congress at the Great Hall of the People in Beijing on March 11. [YONHAP]

The National People’s Congress in China passed a constitutional revision to remove term limits for the president and vice president on March 11 with 2,958 votes in favor, two against, three abstentions and one invalid ballot. The overwhelming result, though, does not necessarily mean broad support from the Chinese people.

The revision included four main points: codification of “Xi Jinping Thought” in the Constitution, installation of a new antigraft agency, removal of term limits for the president and vice president, and stipulation of the Chinese Communist Party’s guidance in the preamble.

The changes in party philosophy were customary, and the installation of a new antigraft agency required a constitutional revision because it would change the government’s organizational chart. But the removal of term limits and stipulation of the Communist Party’s guidance in the preamble are different issues. They go against the direction of Chinese political reform since the country opened up to the world under Deng Xiaoping.

Since 1982, China has pursued political reform by eliminating presidency for life and separating the party from government. The Constitution mandated two-term limits for all state leaders except the chairman of the Central Military Commission. The Congress removed the stipulation of party guidance, which had been added in 1975 during the Cultural Revolution. So the latest revision not only goes against the direction of reform that China has pursued since the ’80s but also harkens back to the dark days of the Cultural Revolution.

The revision was also pushed through unreasonably. The previous four revisions underwent a process of public debate and discussion. This revision was rammed through swiftly. President Xi first proposed it at a Politburo meeting on Sept. 29, 2017. By January, there was already a draft.

Why did Xi rush the change? There’s little other reason than Xi wanting more time in office.
The extension of his tenure is inseparable from his concentration of power. Xi sought to reinforce control because of inefficiencies in China’s group leadership system and decentralized power under Hu Jintao. He must have felt strongly that firm leadership is needed now more than ever as China is in a crucial transition period toward becoming a global power.

The far-right nationalism that has emerged amid China’s rapid growth and deficiencies in Western democracy also influenced the constitutional revision. The procedural limits of Western democracy encouraged confidence in the Chinese system and served as justification for concentrated power in the office of the president, the key figure in the Communist Party’s leadership and guidance.
More importantly, Xi seized power after campaigning against corruption, a move that not only disabled his rivals but also enhanced his popularity among the public.

Does this latest constitutional change mean the revival of lifetime presidency? Xi may extend his time in office a few times, but it does not necessarily mean he will hold it for life. While term limits have been lifted, no one can be free from two intrinsic restrictions: political need and health. President Jiang Zemin stepped down in 2003, but he also retired from the chairmanship of the Central Military Commission, which had no term limits, in 2004. This precedence may apply to Xi as well.

Celebrating the 40th anniversary of China’s reform and opening this year, the Chinese people are no longer the subjects of Mao. Their society has matured, and Deng’s legacy of political reform remains strong among the people and party executives in China. If Xi’s constitutional revision is intended to create a personal dictatorship and permanent presidency, it will not stabilize the long-term leadership system but lead to a new crisis instead.

*The author is a professor of Chinese studies at Incheon National University.