Reality programs showing celebrities naturally interacting with their families have been a popular format for both networks and stars.

For television networks, the format allows them to attract viewers curious about every nook and cranny of their favorite celebrities’ lives without having to spend a lot, since most of the filming is done at the stars’ homes.

As for the celebrities, he or she could use the show as an opportunity to show a different side of themselves. Viewers come away seeing that those on the show are friendly fathers or romantic husbands.

These types of reality programs have been highly sought out in recent years. Despite some controversies over possible instances of nepotism, this reality show sub-genre remains one of the hottest program formats on TV.

However, many of these shows have recently come under fire. After sexual assault accusations against several celebrities came to the fore as the Me Too movement has snowballed in Korea, many viewers were infuriated that they had been deceived by the friendly images the celebrities had cultivated on such programs and pointed fingers not only at the celebrities accused of sexual misconduct, but also their family members.

On March 6, sexual assault allegations involving actor Cho Jae-hyun were revealed on MBC’s weekly investigative documentary program “PD Notebook.” The accuser, a female actor who appeared on the show also testified that she was raped by both Cho and director Kim Ki-duk. Another victim had already accused Cho on Feb. 23 while appearing on JTBC’s nightly news program, “JTBC Newsroom.” She testified that, “when I was alone, [Cho] suddenly appeared behind me and shoved his hand inside [my clothes] and did similar actions continuously.”

After the revelation, the public was outraged and many spoke out against the actor, who had shown a friendly father image to his 26-year-old daughter Hye-jung, who is also an actor. 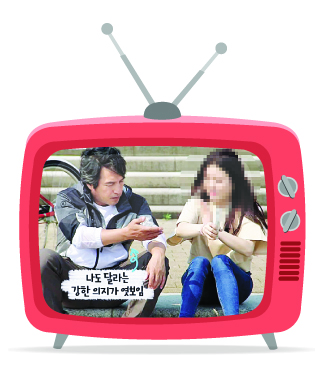 The two had appeared on the SBS program “Take Care of My Dad” in 2015, one of many popular reality programs featuring celebrities and their families. The program aired for about a year.

One user commented “This crazy [expletive] should quit social media. Why should a rapist’s daughter be allowed to communicate online?”

Another user wrote, “Look at her father’s irony. He thinks that his daughter is so precious, but apparently it’s alright to treat women who are not his daughters like trash.”

Cho’s daughter, who debuted on the 2014  OCN drama “God’s Quiz Season 4,” rose in fame after appearing on “Take Care of My Dad” with her father. After the show, her acting career continued to steadily grow. Currently, she has banned any comments to be written on her Instagram account.

Late actor Jo Min-ki, who was featured on the same program, faced a similar situation and Jo recently hanged himself to death following the revelation of numerous sexual misconduct accusations. Before his death, many of Jo’s former students had stepped forward and accused the actor of misconduct while working as a professor at Cheongju University in North Chungcheong.

The image Jo showed on the program was also a friendly, loving father who had a close relationship with his daughter. His daughter, a college student studying abroad, and his wife, who works as a make-up artist, were both openly criticized on social media. Jo’s daughter has recently made her Instagram account private. 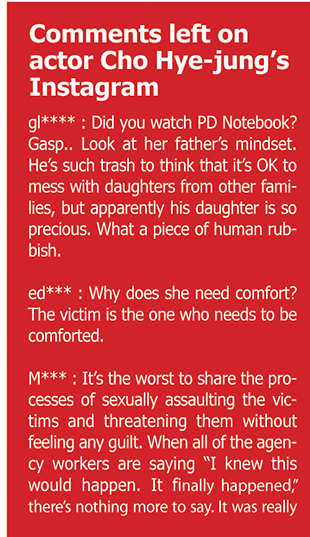 “Some people criticize the family members of the accused celebrities hoping that the celebrities blame themselves for their actions,” said literary critic Kim Hun-shik.

“When the celebrities’ families have been introduced on television, they become prone to such slander as some people believe that the celebrities’ children are bystanders of the crime for enjoying the benefits of being the children of someone famous.”

Kim adds that “this [public criticism] is the result of the public’s strong desire for fairness and its general disgust towards celebrity nepotism.”

The comments criticizing Cho’s daughter are an example. One user chided the young actress by saying, “So he’s your proud father when you could use his power and influence, while starring in ‘Take Care of My Father.’ But when he commits sexual harassment, he happens to not be your father anymore?”

Others shamed her by calling for her to “leave the entertainment industry on her own will.”

Once a reputation breaks, it is not easy to mend. Things for Uhm Tae-woong, who starred in the 2015 KBS TV’s “Return of the Superman,” a family reality show, with his daughter, went downhill after charges of soliciting prostitution were revealed to be true in 2016. His comeback in the movie “Fork Lane,” a production of director Kim, was met with poor reviews and only a total of 170 people watched the film in theaters. Kim, who wrote the script for “Fork Lane,” is currently facing numerous allegations of sexual assault.

Retired professional soccer player Song Jong-kook, who appeared on the 2012 MBC’s family variety show “Dad! Where Are We Going” with his two children, also faced severe public criticism for his actions. On the show, Song was known for being a caring and responsible father to his children. However, after the show, it was revealed that Song had been having an affair with a young woman who posted pictures of her and Song on social media. When the news broke, Song faced strong backlash, which only increased after his divorce with his wife Park Ip-seon in 2015.

“The feeling of betrayal is strong. These entertainers showed a warm image on family variety shows, while doing shady stuff off screen,” said a producer of an entertainment program who requested anonymity. “In my case, I don’t have any plans to direct family variety shows in the future.”

Culture critic Ha Jae-keun insists that “the actions were committed by the individuals, not by the family members. Therefore it does not make sense to blame the family members and demand that they also take responsibility.

“These criticisms toward family members of the accused celebrities are just cruel,” Ha added. “It doesn’t matter whether the children rode their father’s back to become celebrities or not. The public has the right to criticize the celebrities if they are charged for their wrongdoings, but the anger shouldn’t move to the family members and produce more victims [along the way.]”