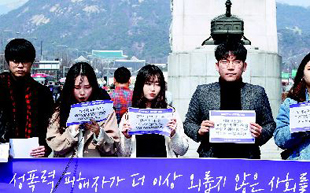 “A professor who sexually harassed students at a gathering in 2001 was suspended for three months and is still teaching at the school. Students raised the issue to the school, but there has been no apology, reflection or preventative measures. Does this make sense?”

On March 13, Kang Beom-seok of the Sogang University Student Council raised his voice at a news conference supporting the Me Too movement and calling for an end to sexual abuse in universities. The event was organized by the preparatory committee for the national university student council network representing 22 schools.

The students attending the news conference were most concerned about the “paternalist” punishment for the professors at fault and the atmosphere of tolerating sexual harassment. The paternalistic culture in universities is nothing new. According to the Ministry of Education, of the 35 professors who were reprimanded for sexual harassment in the last four years at national universities, 24 — or 68.6 percent — are still employed.

In February 2017, a professor at a private university in Gwangju was given a three-month suspension, including the winter break, for sexual harassment, asking female students whether they had slept with men. The public was outraged and condemned the light punishment.

Many students don’t trust school administrations. In 2016, Michigan State University professor of social work Cho Hyun-kag surveyed undergraduate and graduate students at six universities in Seoul on sexual harassment and violence at schools. When asked whether they contacted administrators, agencies or staff at the university to report sexual violence, 92 percent of the 1,944 respondents said “No.” Of those respondents, 42 percent said that they thought reporting it to the school would not resolve the issue.

The students I met while investigating sexual harassment by an adjunct professor teaching at a private university in Seoul shared similar views. One of the victims said that students boycotted the class taught by the professor in question last year, but the teacher’s assistant called to ask why they were not attending the class, and nothing changed. “When I ran into the professor, he scolded me.”

Not just in the universities but at workplaces, in the military and prosecution, paternalist punishments continue. The victims feel more hurt and the offenders wrongfully think that what they had done was not so bad. As the Me Too movement is spreading across the society, now is the best time to end the lenient punishments.