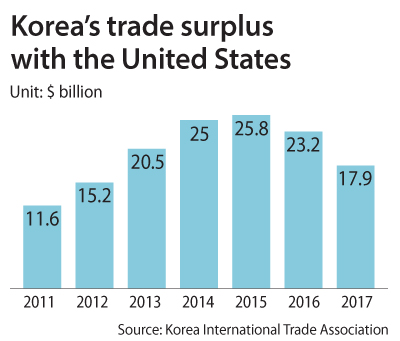 A Korean trade group said Wednesday that the country’s trade surplus with the United States has been declining in the past two years, bolstering arguments that their bilateral free trade agreement has not been as harmful to the U.S. economy as the Trump administration has claimed.

According to the Korea International Trade Association, the country’s trade surplus with the United States has been steadily narrowing in the past few years, from $25.8 billion in 2015 to $23.2 billion in 2016 and $17.9 billion last year.

Major export items such as cars, auto parts, mobile devices and steel plates have not been selling as well in the United States, while Korea has increased imports of semiconductor processing equipment, liquid petroleum gas and meat.

Auto exports, including cars and parts, have been suffering lately because of high competition and slow sales in the U.S. market, the association said in its report. Steel exports have been negatively impacted by a U.S. Commerce Department investigation into alleged dumping.

Meanwhile, Korean manufacturers of memory chips have been increasing their purchases of U.S. semiconductor processing equipment as their facilities are expanding in response to soaring demand for chips.

“Imports from the United States are expected to grow while exports to the United States from Korea remain sluggish for the time being, impacted by protectionist trade policies,” said Kang Nae-young, a researcher at the trade association. “The fact that Korea’s trade surplus with the United States has been in decline for the past two years should be reflected in the renegotiation process for the FTA.”

The free trade agreement between the United States and Korea entered into force in March 2012. The Trump administration has been pressing for a renegotiation, calling it an unfair deal.