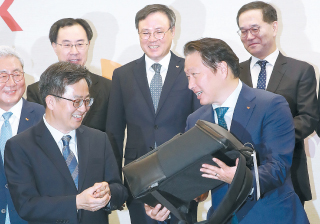 SK Chairman Chey Tae-won, right, hands over a backpack made by an SK-backed social enterprise to Finance Minister Kim Dong-yeon after a meeting on Wednesday at the conglomerate’s headquarters in central Seoul. [SK]

Chey Tae-won, chairman of SK Group, said his company would spend 80 trillion won ($75 billion) over the next three years on job creation and new technologies to meet the government’s expectations of social contributions from big business, during a meeting with the finance minister at the company’s headquarters in central Seoul on Wednesday.

This year alone, Korea’s third-largest conglomerate plans to invest 27.5 trillion won, 44 percent more than last year. Most of it will likely go toward production of semiconductors and batteries for electric cars.

“The social value that SK has been pursuing is directly related to job creation,” Kim Dong-yeon, the finance minister, said during the meeting. “The market and corporations should be spearheading the move, and I hope [SK] will continue contributing to job creation.”

In response, Chey said, “We at SK also think we should break conventional thinking and transform ourselves, marching toward a new market and world,” emphasizing that the company would pursue social as well as economic value.

After a photo session together, Kim bought a backpack made by Morethan, a small social enterprise that SK has been supporting.

Morethan is a fashion retailer that makes bags and small leather goods using upcycled textiles and components from stripped cars with the goal of reducing waste.

Kim has yet to visit Korea’s largest company, Samsung.