Brooks will step down as USFK chief: Gov’t sources

Brooks will step down as USFK chief: Gov’t sources 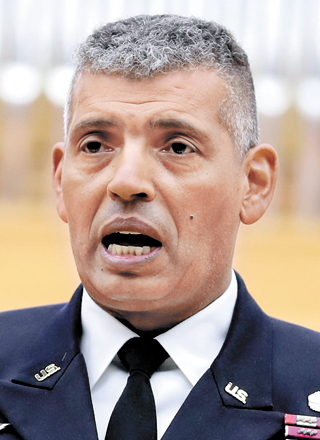 Gen. Vincent Brooks will leave his post as commander of United States Forces Korea (USFK) as early as this summer, according to various Korean government sources on Wednesday.

“Brooks has expressed his plans to quit his post as commander of the Combined Forces Command in July or August,” one government source told the JoongAng Ilbo. “However, he has not officially informed the Korean Ministry of National Defense or military authorities yet.”

Brooks served in the post as commander of the USFK, United Nations Command and the South Korea-U.S. Combined Forces Command since April 30, 2016. USFK commanders usually serve in this post for two to three years.

Past USFK commanders who served for just two years were generally transferred to another four-star general post. It has been customary for chiefs of the ROK-U.S. Combined Forces Command who served a three-year term to retire from the military afterward.

As a commander, Brooks is considered to be understanding of Korea’s positions and worked well with U.S. Defense Secretary Jim Mattis.

Brooks previously served under Mattis when the Pentagon chief served as commander of United States Central Command from 2010 to 2013, and Brooks is known to be trusted by Mattis.

The government source said, “Brooks did not reveal the reason for leaving the post but it seems to be because of personal reasons.”

The Korean Ministry of National Defense and military officials expected Brooks to stay in his post longer and are perplexed, especially as he is considered a commander who understands Korea very well.

Brooks was involved in the controversial deployment of the U.S.-led Terminal High Altitude Area Defense antimissile battery to Korea, and one diplomatic source said, “Brooks is known to have grievances toward Korea over the deployment process of the Thaad system.”

A successor to Brooks has yet to be decided.