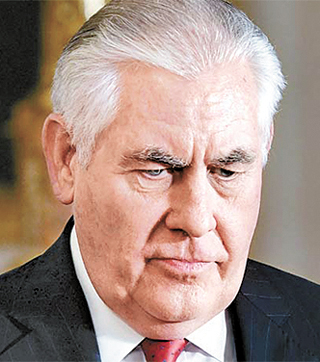 Rex Tillerson, one of the most consistent advocates of diplomacy with North Korea, was fired Tuesday as U.S. secretary of state just days before South Korean Foreign Minister Kang Kyung-wha flies to Washington to discuss the upcoming summits with Pyongyang.

Tillerson was abruptly sacked by President Donald Trump Tuesday via Twitter as he returned from an Africa trip and replaced by the more hawkish Mike Pompeo, who was director of the Central Intelligence Agency.

The switch comes at an especially sensitive time as Trump announced last week that he accepted an invitation to an historic summit with North Korean leader Kim Jong-un by May - a period in which seamless cooperation between the president and his top diplomat is vital.

South Korean Foreign Minister Kang had been scheduled to leave Thursday for a three-day trip to Washington and meet with Tillerson ahead of the inter-Korean summit scheduled for late April and the Trump-Kim Jong-un meeting the following month. The Foreign Ministry in Seoul initially considered delaying Kang’s trip after news of Tillerson’s sudden exit broke, but decided Wednesday to carry on as initially planned.

Trump and Tillerson have been at odds for months now, especially after the secretary of state reportedly called the president a “[expletive] moron.” The president frequently undercut Tillerson’s diplomatic efforts, including on North Korea. Tillerson also appeared out of the loop when Trump accepted Kim’s summit invitation last week after meeting with South Korean envoys.

In a press conference Tuesday following his firing, Tillerson focused on his achievements over the past year and said, “First, working with allies, we exceeded the expectations of almost everyone with the DPRK maximum pressure campaign,” using the acronym for North Korea’s official name, the Democratic People’s Republic of Korea.

He recollected his trip to Asia in March last year, during which he announced that “the era of strategic patience was over” on North Korea and recounted that Washington has taken steps “to dramatically increase not just the scope but the effectiveness of the sanctions.”

The State Department, he said, “undertook a global campaign to bring partners and allies on board in every country around the world.”

He did not make any mention of the planned summit between Trump and Kim.

Pompeo is seen as a better representative of Trump’s views and wishes and apparently has his full confidence. Pompeo, a hard-liner on the North Korea issue, has previously suggested a regime change and is an adamant opponent of the Barack Obama administration’s 2015 deal lifting economic sanctions on Iran in return for restrictions on the country’s nuclear weapons program.

“As for the regime, I am hopeful we will find a way to separate that regime from this system,” Pompeo said in July last year at a security forum, referring to the Kim Jong-un government. “The North Korean people, I’m sure, are lovely people and would love to see him go.”

Tillerson has on numerous occasions emphasized that he is not seeking a North Korean regime change or collapse. He has enjoyed a close friendship with Defense Secretary Jim Mattis, and the duo served as a unified voice of moderation in the Trump Cabinet, being on the same page on many policies including resolving the North Korea nuclear issue through diplomatic means.

Trump told reporters Tuesday that while he got along with Tillerson and wished him the best, “it was a different mindset.”

He said, “I’ve worked with Mike Pompeo now for quite some time. Tremendous energy, tremendous intellect. We’re always on the same wavelength. The relationship has always been very good. That’s what I need as secretary of state.”

Last October, Trump famously discredited Tillerson while the secretary of state was in Beijing discussing the North Korea issue, telling him over Twitter to stop “wasting his time trying to negotiate with Little Rocket Man,” referring to Kim.

The New York Times reported Wednesday that one reason for Trump’s eruption at that time was Tillerson’s suggestion of secret talks with North Korea, which surprised South Korean President Moon Jae-in and led to Seoul lodging a complaint with the White House. It reported that Tillerson failing to take into account Seoul’s reaction was an embarrassing diplomatic stumble.

A Blue House spokesman, however, denied Seoul lodged a complaint with the White House at the time.

Neither Tillerson, a former chief executive of Exxon Mobil, nor Pompeo, a former U.S. congressman from Kansas and graduate of West Point and Harvard Law School, had any prior diplomatic experience going into the post.

“This first meeting, I think, is between the president and the leader of North Korea, the two people who are the decision-makers, who will ultimately decide what arrangements are acceptable,” Pompeo told Fox News Sunday. “But make no mistake about it: While these negotiations are going on, there will be no concessions made.”

He said the Trump administration will continue to put pressure on North Korea and disrupt its economy, adding, “We will see how the talks and the negotiations proceed.”

On Trump’s decision to talk with Kim, Pompeo said it was “the right time to begin that conversation.” He noted the North halting its nuclear and missile testing, allowing the joint annual South Korea-U.S. military exercises and leaving on the table a discussion of denuclearization are “conditions that the North Korean regime has never submitted to in exchange for conversations,” calling them “real achievements.”

Pompeo said he spent the weekend reviewing the CIA’s history of the negotiations and added that the agency knows “a fair amount” about Kim and is in a position to inform the president of risks going into discussions. He continued, about Kim, “We know that he is rational in the sense of the response to stimulus…he’s still a very young leader, but clearly in charge of his country.”

He added, “President Trump isn’t doing this for theater. He’s going to solve a problem.”

Tillerson will officially leave his post on March 31 and has already been delegating responsibilities to Deputy Secretary of State John Sullivan.

On whether Seoul had been aware of Tillerson’s exit in advance, a Ministry of Foreign Affairs spokesman said in a statement, “The departure of a high-level U.S. government official is not an issue that is decided upon after consulting with our government.”

He added Seoul and Washington have maintained close contact through the National Security Council, diplomatic and military channels.

The Foreign Ministry announced at the beginning of the week that Kang will visit Washington for a meeting with Secretary of State Tillerson to “share their assessments on the recent, fast-paced developments in the situation on the Korean Peninsula.”

They were expected to have “in-depth discussions” on ways that the two countries can coordinate closely for the inter-Korean and U.S.-North Korea dialogue on the denuclearization of the Korean Peninsula.

After the news of Tillerson’s firing broke, the ministry said it would hold an internal review and discuss with Washington on whether to follow through with Kang’s trip, and later decided to push through with the trip.

“In the current situation, where there are important issues to discuss between Seoul and Washington such as the North Korea nuclear problem, the alliance and economy and trade, regardless of a change in the U.S. secretary of state, our two sides shared the view that it is essential to maintain strong cooperation through close dialogue, and the U.S. side wanted our foreign minister to visit as originally planned,” said the Foreign Ministry later in the afternoon.

Kang will hold talks with Sullivan, the ministry added.

“Even if the secretary changes, the officials dealing with North Korea, Korean Peninsula and Asia issues remain the same,” Lee told reporters at Incheon International Airport. “Through diplomacy between leaders and the activities of our special envoys, an important opportunity for an inter-Korean summit and U.S.-North summit was attained. Watertight cooperation between Seoul and Washington is more important than any time before.”