Lee apologizes for being grilled by state

Lee apologizes for being grilled by state 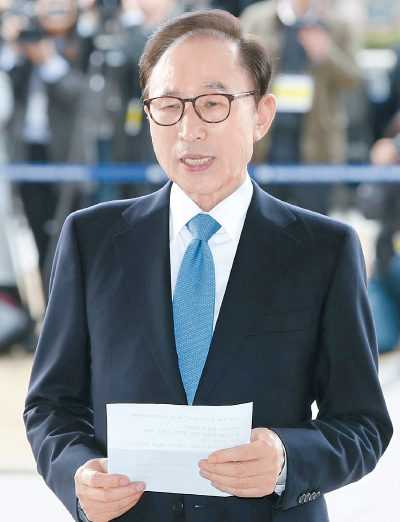 Former President Lee Myung-bak reads a prepared statement on Wednesday in front of the Seoul Central District Prosecutors’ Office after he appeared for questioning as a suspect in a criminal investigation. [YONHAP]

Former President Lee Myung-bak was questioned by prosecutors on Wednesday about alleged corruption and abuse of power he committed during his presidency, becoming the fifth former president of the country to face a criminal investigation.

Lee, 76, arrived at the Seoul Central District Prosecutors’ Office around 9:23 a.m., complying with a subpoena to appear for questioning as a suspect in a criminal investigation. Before entering the building, Lee briefly addressed the press, reading a prepared statement.

“I came here with a devastated heart,” Lee said. “I offer my sincere apology to the people of our country for troubling them amid economic hardship and a serious security crisis on the peninsula.”

“As a former president, I have many things I want to say, but I promised to myself that I must save my breath,” he said. “All I wish for is that this will be the last time in history” that a former president is being investigated.

Lee, who was in office from 2008 to 2013, is the fifth former president to have been questioned by prosecutors. Former Presidents Roh Tae-woo and Chun Doo Hwan were questioned in 1995, Roh Moo-hyun in 2009 and Park Geun-hye last year.

While four former presidents including Lee appeared for questioning voluntarily, Chun refused to comply with a summons and was later arrested.

Ever since the prosecution started probing various issues involving Lee, his family and key aides, the former president complained that it was political payback by President Moon Jae-in for the death of Roh Moo-hyun. Roh, Lee’s predecessor, killed himself in 2009 during a bribery probe involving his family. That probe was conducted under Lee’s administration.

Moon, Roh’s longtime friend and political disciple, has furiously rejected Lee’s claims that the Blue House was manipulating the prosecution in a political vendetta.

According to the prosecution, Lee is facing about 20 charges, which include receiving bribes, embezzlement and tax evasion. The graft charges involve a total of 11 billion won ($10.34 million).

Before the questioning began, Lee had a brief meeting with Han Dong-hoon, third deputy director of the Seoul Central District Prosecutors’ Office. “I ask for an impartial investigation,” Lee was quoted as saying by a prosecution source. Han reportedly promised a fair probe.

“We are not asking him if he is admitting to charges or not,” a source from the prosecution said. “We are just confirming facts one after another.”

According to the prosecution, the questioning took place in Room 1001, where Lee’s successor Park Geun-hye was investigated one year ago. The entire session was video-recorded, and Han monitored the questioning from outside the room.

Lee is being represented by four lawyers. During the morning session, Kang Hoon, a judge-turned-lawyer, sat next to Lee.

The morning session ended around 1:10 p.m., and Lee had lunch. The questioning resumed at 2 p.m. As of 8 p.m., the questioning was still ongoing.

During the morning session, Shin primarily questioned Lee about a series of allegations involving DAS, an auto parts maker suspected of being used to raise slush funds for the former president. Although the company is technically owned by Lee’s elder brother, the prosecution suspects that the former president is the true owner of the firm.

Song Kyung-ho, another senior prosecutor from the Seoul Central District Prosecutors’ Office, was expected to take over to question Lee about other allegations.

“We questioned Lee mainly about the allegations surrounding the true owner of DAS and his secret properties and assets registered in other people’s names,” a prosecution official said after the morning questioning.

“He made clear his position that he has nothing to do with DAS and other allegations surrounding hidden assets, including the Dogok-dong plot,” the source said.

A plot of land in Dogok-dong, southern Seoul, was considered a key to identifying the true owner of DAS. Lee’s elder brother purchased the largest stake in DAS with money raised by selling the plot. If the land actually belonged to the former president, then he should be seen as the actual owner of DAS, the prosecution said earlier.

“We don’t want to say whether he is completely denying all charges or not, but he is maintaining the position that the assets involved in the allegations were not his,” the source said. “There is no dramatic change from his initial position.”

The source also said Lee is not exercising his right to remain silent.

The prosecution suspects that Lee abused his power as president to collect DAS’s investment from a failed investment venture, BBK, before small private investors retrieved their money through a civil suit. BBK was an offshore investment fund established by Lee’s former business partner Kim Kyung-joon.

DAS also initiated a lawsuit in the United States to retrieve its investment from Kim, and Samsung Group paid an expensive legal bill for DAS. Samsung paid $3.7 million to Akin Gump Strauss Hauer & Feld LLP, a major law firm, for its legal representation of DAS in a U.S. court from 2009 to 2011, and the prosecution suspects that it was in return for the presidential pardon of its chairman, Lee Kun-hee, in 2009.

If former President Lee is identified as the owner of DAS, the prosecution can apply a bribery charge.

“A global conglomerate’s decision to pay a legal bill for a small company that produces car seats allows a reasonable doubt that it was a request in return for an influence exerted,” said a lawyer who once headed a district office of the prosecution. “If DAS is owned by Lee, the money is a bribe. If Lee is not the actual owner, he can still be charged for accepting a bribe through a third party.”

Lee has flatly rejected the charges. “Akin Gump’s support was not significant, and it wasn’t really helpful in the lawsuit,” an aide to Lee said. “Because we didn’t receive any help and because we never made any request to Samsung, we cannot accept the accusation.”

Lee was also accused of receiving 700 billion won in total from other private companies and 400 million won from politicians.

Lee earlier accepted a part of the charges. An aide to the former president said Lee had received 800 million from Woori Chairman Lee in 2007. “Because it was given before Lee was elected president in December 2007, the money is not bribe, but illegal political funds,” the aide said. “The seven-year statute of limitations has expired, so there is no charge possible.”

The prosecution, however, said Lee should be charged with bribery, because money was delivered after 2007 and payments stopped only after Lee Pal-sung succeeded in securing his second term as Woori Chairman in February 2011.