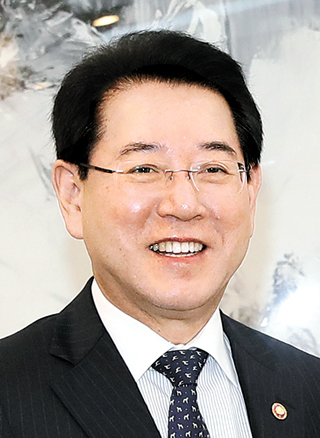 Agriculture Minister Kim Yung-rok Wednesday offered to step down from his post to run in local elections, ending his eight-month stint at the government job.

Kim, a two-time lawmaker from the ruling Democratic Party of Korea, said he decided to quit his run for the governorship of South Jeolla in the June 13 elections.

The 63-year-old took charge of the Ministry of Agriculture, Food and Rural Affairs in July 2017 after working for President Moon Jae-in’s election campaign earlier that year.

Kim held various posts in the Jeolla provincial government and smaller cities before being elected to the National Assembly 10 years ago.

His resignation came at a critical time as Korea and the United States have been in talks to amend their bilateral free trade agreement amid mounting pressure from Washington for greater market access.

As the local farming industry has claimed massive damage due to cheaper U.S. food products over the past five years of the trade pact, Korea’s chief negotiator has vowed to stand firm against demands for further market opening in the agriculture sector in the upcoming negotiations.