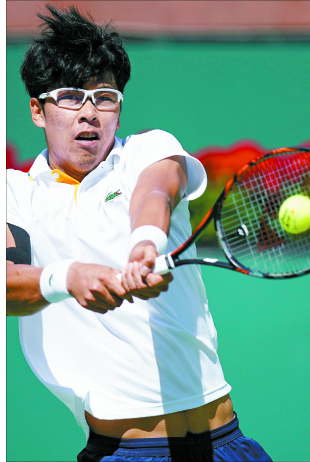 Chung Hyeon plays against Pablo Cuevas of Uruguay during the BNP Paribas Open at the Indian Wells Tennis Garden in California on Wednesday. [EPA/YONHAP]

Korean tennis star Chung Hyeon defeated Pablo Cuevas of Uruguay in straight sets at the Indian Wells Masters in California on Wednesday, securing his spot in the quarterfinals.

It is the fifth consecutive ATP Tour event in which the 21-year-old has reached the quarterfinals. Chung is now ranked 26th in the world, up from 58th at the start of the year.

Cuevas, world No. 34, couldn’t do much to stop Chung in the first set, with the Korean securing an early lead 6-1. Chung returned strong in the second set, winning the first five games. Cuevas bounced back, breaking Chung’s serve twice to take the score up to 5-3, but there was no stopping Chung, who won the final game to take the set and the match.

Chung will face world No. 1 Roger Federer of Switzerland in the quarterfinals at 7 p.m. on Thursday local time, 11 a.m. today in Korea. He last competed against Federer in a highly anticipated semifinal match at the Australian Open in January but was forced to retire in the second set because of a foot injury.

The Korean star gained wide popularity when he caught the tennis world by surprise after defeating Novak Djokovic of Serbia 3-0 in the round of 16 at the Australian Open. He went on to beat Tennys Sandgren of the United States in the quarterfinal before falling to Federer.

His medical emergency also cost him his place at the New York Open as he had to pull out of the event in early February.

But Chung returned to the tennis scene at the end of February at the Delray Beach Open in Florida, where he also reached the quarterfinals but failed to progress further after losing 2-1 to Frances Taifoe of the United States.

The quarterfinals were as far as Chung got at the ATP Mexican Open in Acapulco at the start of March as well, losing to world No. 8 Kevin Anderson of Brazil in straight sets.