Kwon Sang-hyeon propelled himself forward with his right arm as he made his way through the backwoods of the Alpensia Biathlon Centre in Pyeongchang County, Gangwon, on Tuesday. He had but his right arm, and as he approached the target, he stopped to reach for his gun. 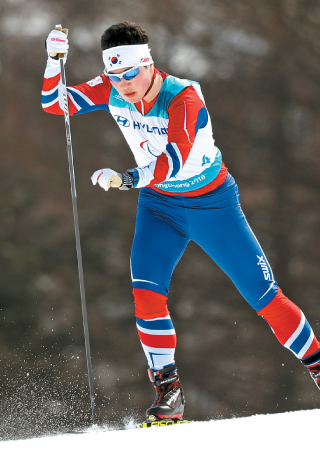 Bang, bang, bang. Though he did not miss a single target, he was still seventh out of 14 athletes in the men’s 12.5-kilometer standing biathlon race at the Paralympics.

At the second shooting stop, Kwon fell further behind when he missed a target and had to run an extra loop on skis as a penalty. (In biathlon, which includes a combination of skiing and shooting, an athlete who misses a target must ski an extra loop for each missed target.) He eventually finished 12th, with a time of 44 minutes and 42.02 seconds.

Kwon, 20, first picked up cross-country skiing in middle school, where a teacher recommended it as a way to lose weight.

A medical accident at birth paralyzed Kwon’s left arm. His impairment made it difficult for him to get along with other kids at school, and with the exception of three or four friends, he didn’t recall talking to many people.

In his adolescent years, he would lock himself in his room all day and play computer games. By his third year in middle school, he weighed 119 kilograms.

Kwon was diagnosed with obesity, and his homeroom teacher, who taught physical education, recommended he enroll in a para-ski camp.

“I initially started because I wanted to lose weight,” Kwon said. “[Para-nordic] isn’t as dangerous as alpine skiing, and it felt refreshing. It was also fun shooting a gun.”

More than anyone, Kwon’s father wanted him to be involved in sport. “Because I also have an impairment, I was always strict with my son,” he said. Mr. Kwon’s right leg is 5 centimeters shorter than his left due to an injury to his right hip joint. “I would always tell him to ‘live bravely.’”

What started as a weight loss regiment led Kwon to the Paralympics.

After losing 50 kilograms in three years, Kwon began competing at the international level for both para-biathlon and cross-country skiing and became part of the national team in 2015. At a para-biathlon World Cup event in Pyeongchang in March 2017, Kwon finished sixth and started to dream about medaling at the Paralympics.

But at the men’s 7.5-kilometer standing event for biathlon last Saturday, he finished 14th among 17 athletes, and at the 20-kilometer cross-country standing event on Monday, he placed 12th.

“I should have been more careful when I was shooting,” Kwon said after his 12.5-kilometer biathlon race on Tuesday in which he also finished 12th. “But it was a good experience. In four years, I want to challenge myself to medal in Beijing.”

He has summer ambitions, too. After watching Lee Do-yeon, a fellow biathlete and mother of three, win silver in para-cycling at the Rio Paralympics, Kwon says he has been inspired to pick up a summer sport as well.