With a 5-4 victory against Great Britain at the Gangneung Curling Centre in Gangwon on Thursday morning, the Oseong Avengers secured their spot in the PyeongChang Paralympics curling semifinals with one game still to play. 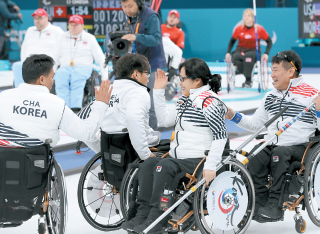 The Korean wheelchair curling team celebrates after winning the round robin game against China 7-6 at Gangneung Curling Centre in Gangwon on Thursday. [YONHAP]

Korea came back with a vengeance in the sixth end, scoring a point in the sixth and seventh ends to tie the game. After a nail-biter of an eighth end - Britain had two stones in the house and two guarding with only three throws left in the game - Korea emerged on top after a shot from Jung Seung-won put the home country slightly closer to the button. A final shot from Cha Jae-goan’s secured Korea’s victory.

“The origin of curling comes from Scotland,” Jung said. “And we defeated that country. I can’t believe this. I am very thrilled.”

With nine wins, two losses and one game still to play in the round robin, Korea qualified for the semifinals alongside Canada and China. Norway qualified as the fourth team after beating Slovakia in its final game.

Korea returned to the curling sheet in good spirits in the afternoon, rounding off its round robin action with a win over China. By defeating China 7-6, Korea moved up to tie for first in the round robin standing.

While leading the game 3-1, Korea allowed China to take the lead by giving away four points in the fourth. But once again, Korea steadily gained ground in the fifth and sixth ends to take back the lead and it all came down to the eighth end, when both teams were tied at 6-6. As China failed to slide its last stone into the center of the house, Korea, who had a stone in the house and still had the hammer, successfully won a point to win the game.

In curling, the name of the team is normally based on the surname of the skip, hence Team Kim. The wheelchair curling team went in a different direction with Oseong Avengers. The first syllable oh is Korean for five, while seong means both surname and star. The Oseong Avengers are a five-star team with five different surnames.

Having qualified for the semifinals even before their last round robin game, the Korean wheelchair curling team will continue their journey to the semifinals, for the first time in eight years, today at Gangneung Curling Centre.

“We’ll show something different tomorrow,” Jung said. “Our goal is to win a gold medal.”

As Korea beat both Canada and China, securing a perfect head-to-head record with the top teams, it finished at the top of the table and will play Norway in the semifinals at the Gangneung Curling Centre in Gangwon today.