Korea’s hopes for a miracle on ice were dramatically dashed at the Gangneung Hockey Centre in Gangwon on Thursday, losing 7-0 to top-ranked Canada in the semifinals of the PyeongChang Paralympics para-ice hockey competition.

The Korean ice hockey team waves to fans after the semifinals game against Canada at Gangneung Hockey Centre in Gangwon on Thursday. [YONHAP]

Despite the loss, Korea still has a shot at winning the country’s first medal in the sport, as the team advances to the bronze medal game.

With Thursday’s loss, the Korean para-ice hockey team’s all-time head-to-head record against Canada is now 0 wins and 17 losses. Although the Korean team has improved significantly since the 2014 Sochi Paralympic Games, the Canadian team is still in a different league.

Korea made a slight change in the team’s roster, starting Lee Jae-woong as goaltender rather than Yu Man-gyun. But that wasn’t enough of a change as Liam Hickey scored the first goal for Canada just 4 minutes and 17 seconds into the game. Dom Cozzolino followed with a second goal in the sixth minute. 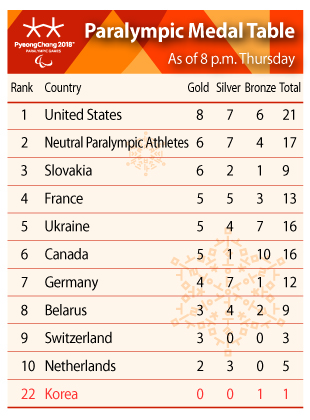 Jung Seung-hwan made Korea’s first and only shot on target at 8 minutes and 15 seconds while Canada had 12 shots on target - and four goals - in the first period.

In the second period, Korea seemed to have settled down a little. Canada received three minor penalties, with players sent to the penalty box for two minute periods. Korea ended up giving up a single goal in the second and two more in the third period.

Canada, which won the 2006 Torino Winter Olympic Games, maintains its streak of scoreless wins. In the preliminary round, Canada defeated Sweden, 17-0, Italy, 10-0 and Norway 8-0. Canada has so far scored a total of 42 goals in Gangneung.

Since the two teams first started playing together in 2012, Korea has never stood a chance against Canada, losing two games by more than 10 goals. In its most recent game, a friendly, Korea lost 9-3. Korea entered the final game on Thursday with a feint glimmer of hope as the last time the two teams faced off at the Gangeung Hockey Centre the score was only 0-2, a less painful loss than usual.

Canada is a powerhouse in para-ice hockey, having won the most World Championships, at four. The biggest reason behind having a strong para-ice hockey team comes from the country’s facilities, which allow both impaired and able-bodied players to learn ice hockey on a sledge. In addition, ice hockey rinks are easily accessible to the public and the sport is hugely popular. Though the country does not have a professional para-ice hockey league, the large number of players allow the athletes to build experience.

Despite the loss, the crowd couldn’t be silenced throughout the game on Thursday. Although there were empty seats in the stadium due to group ticket purchases, the turnout was still good and the audience remained in good spirits.

Korea has already broken the record for the country’s best finish in ice hockey at the Winter Paralympics, as it finished sixth and seventh in the past two Games. At this year’s Paralympic Games, Korea was the first team in Group B in the preliminary round to qualify for the semifinals, finishing second in the group as it lost to the United States 8-0.

The bronze medal game will be played at noon tomorrow at Gangneung Hockey Centre in Gangwon.