Korean speed skater Kim Bo-reum, who won silver in the women’s mass start at the PyeongChang Winter Olympics, has been hospitalized for psychological treatment, along with her mother, the athlete’s agency said Wednesday. 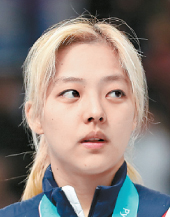 Bravo and New said Kim visited a hospital in her hometown of Daegu on Monday, and a doctor advised hospitalization after she showed symptoms of anxiety disorder. Kim’s mother showed similar symptoms and was recommended for hospitalization, it added.

Kim was at the center of controversy regarding Korea’s performance in the women’s team pursuit competition. She was vilified by the public for blaming her teammate Noh Seon-yeong for the team’s poor performance in a preliminary contest.

During the race, Noh fell far behind her teammates with two laps to go and failed to narrow the gap before the finish line. Kim and Park Ji-woo did not look back, drawing criticism that they failed to work together in a race where teams typically cross the line as one.

“We raced as fast as we could in the final lap,” Kim said in an interview after the game. “But since the final record is determined by the time the last racer of a team crosses the finish line…”

Her comment didn’t sit well with many Koreans, who felt that she was turning on her teammate rather than acknowledging their lack of teamwork.

Outraged by her remark, over 600,000 Koreans took to the Blue House online petition page to demand Kim’s expulsion from the Korea Skating Union.

According to officials, Kim was afraid to meet people during her stay at the athletes’ village in Pyeongchang County, Gangwon, following the incident. The 25-year-old later won silver in the women’s mass start, but that failed to quell fans’ anger.

“It looks like her trauma from the Olympic Games was severe,” an official with Bravo and New said. “Since we haven’t seen the results of other mental tests on her, it isn’t clear how long she will stay at the hospital with her mother.”