Reflecting on the past and capturing today

Reflecting on the past and capturing today

“Kagampan (Fullness of Time)” by Renato Habulan is on display in “From Vietnam to Berlin.”  Props from a video titled “Believe It or Not” are on display inside the “PARKing CHANce” exhibition.

GWANGJU - Travelers may head to the southern city of Gwangju for a variety of experiences, and the Asia Culture Center (ACC) has just added one more reason why the city deserves a visit this spring.

The ACC opened two new exhibitions on March 8, both to run through July 8, each focusing on different mediums and the role of art in portraying the society in which it is born. While “PARKing CHANce” focuses on the images of the specific moments in time and space as captured through the camera lens, “From Berlin to Vietnam” presents how different artists each interpret and recreate the world and time in history they live in. 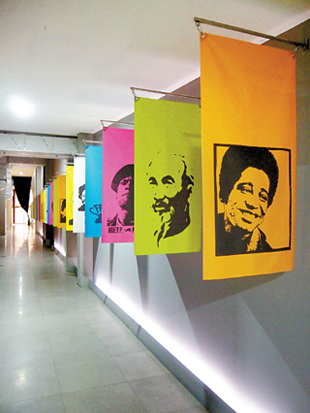 Outside the exhibit hall are colorful flags with the faces of different figures in modern history, such as Che Guevara. [YOON SO-YEON]

An artistic view of history ‘From Vietnam to Berlin’

To learn about the history of a country, most turn to the facts and figures recorded in books, but art can leave deep impressions and allows viewers to see history from the perspective of those who were there.

“From Vietnam to Berlin” is a time-traveling walk through not just different spaces, but different eras of history - from the early 1950s of the Vietnam War to the late 1980s when the Berlin Wall fell. Some 170 figurative paintings by 51 artists from 25 different countries are on display.

Due to the diversity of the different artists, their nationalities and their subjects, it may be hard at first to see how they were grouped together under a single theme at the same exhibition, but each of the paintings, according to Kim Sung-won, the artistic director of ACC, are different representations of big chapters in history and how individuals react to the overwhelming events.

“We chose works from all over the world that answer to the different political issues and events in their different countries. We were careful to choose the biggest and most important events in history,” said Kim. 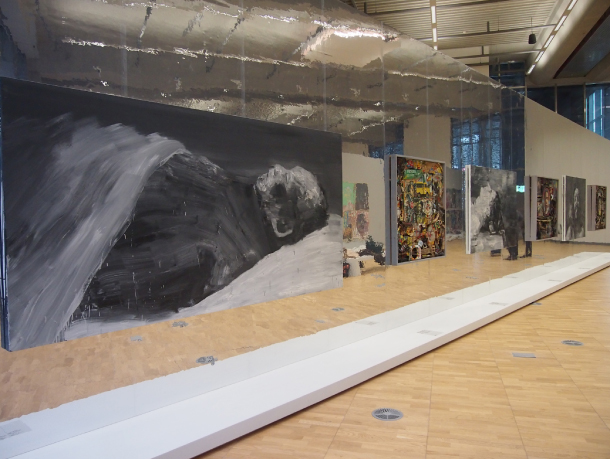 The walls of “From Vietnam to Berlin” have been covered in mirrored sheets which reflect not only the audience, but also the paintings on the other side of the gallery space. The curators called this “a conversation between the paintings.” [YOON SO-YEON]

Starting with the late 1950s, the exhibit walks visitors through a chronological collection of world events. As explained by Kim Seung-duk, a co-director of French art center Le Consortium, along with Franck Gautherot who was also at the press conference on March 8, the idea of politics has never been closer to our everyday lives than now.

“Technology has advanced so much that political issues are in all of our lives,” explained Kim. “So the exhibition is displayed in a way that if you look at the paintings, you see not only the paintings but also yourself and the images of the past all at the same time, because the [mirrors on the] walls reflects the images. It’s a new experience that doesn’t give us an answer, but makes us question the world that we’re living in.”

The vast array of artists and works include some names familiar to many local art fans, such as pop artists Robert Rauschenberg and Andy Warhol, as well as Korean artists such as Kwak Duck-Jun, Suh Yong-sun, Shin Hak-chul and Min Joung-ki.

One section of the exhibition that older audiences should not miss out on is the “Torture Room” by Group Denuncia, a group of four artists based in Paris. The room is closed off from the rest of the exhibit area, and features paintings of torture done by the Brazilian military dictatorship - displaying the images in such a serene setting makes them all the more dramatic.

“There are a lot of events that you wouldn’t have [come across] in the past,” said Kim of Le Consortium. “It was hard to know about those events back in the past, with no internet or phone. But nowadays, we have access to all of that information and we can research through while looking at the exhibition, which is another fun part of the experience.” 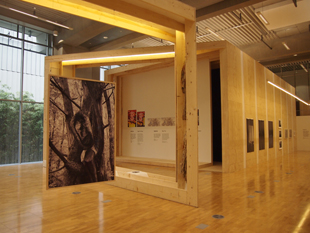 You may not have heard of the media artist duo “PARKing CHANce,” but many Koreans have heard of director Park Chan-wook and his younger brother, the contemporary artist Park Chan-kyong. The two, both known for creativity in their respective fields, have also worked together outside of their professional works. The “PARKing CHANce” exhibition is the first opportunity to see their collaborations all put together.

Featuring six video works alongside some of the props used in the films, as well as a collection of photographs shot by the two artists that have not been previously presented to the public, the exhibit is a chance for visitors to see media art works that the two have created for the pure joy of art.

“The name PARKing CHANce, which we use when we create something together outside of our profession, comes from [the common syllables in] our names,” explained Park Chan-kyong who was present at the opening ceremony on March 8, and continued, “but also from the fact that creating something that’s not attached to any parties or money is hard - just like getting a parking spot in Seoul.” 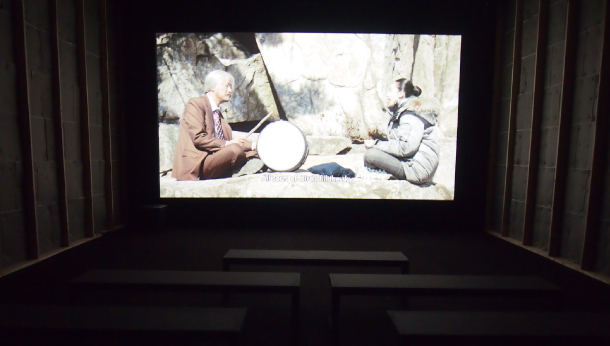 The exhibit offers visitors a chance to view films made by the two brothers of “PARKing CHANce,” including “Day Trip,” pictured above, featuring Song Kang-ho and Jeon Hyo-jeong. [YOON SO-YEON]

Many of the works on display are themed around North Korea - not in the political sense, but in “a pure representation of North Korea, free from any stance,” according to Park. The exhibit starts with “Decades Apart,” a three-dimensional remake of Park Chan-wook’s film “Joint Security Area” (2000), then leads visitors to other photographs and movies, including “Believe It or Not,” a video that questions the knowledge Koreans have of the country closest to them, but at the same time, the furthest away.

The inside of the exhibit has been designed by architect Jeong Eui-yeob, as a visual representation of the films playing inside each small theater. “The openness of the space helps set a very casual mood to the inside, which is important to add a touch of democracy in our exhibition,” said the younger Park. “The contents of the exhibit are very diverse, with a lot of genres, depth and motifs behind it. When you look around, you’ll see that the exhibition is very rich with diversity.”