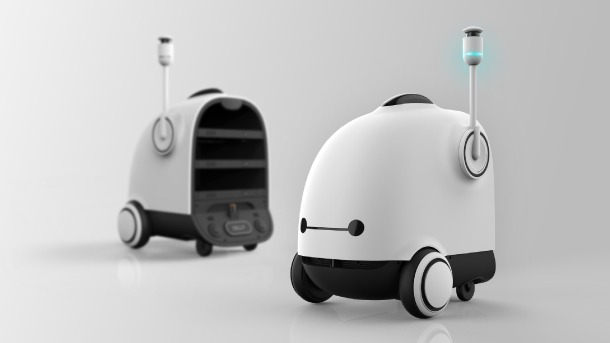 Leading food delivery app Baedal Minjok is developing a delivery robot which it plans to unveil by May, according to the company Thursday.

Baedal Minjok, also known as Baemin, launched the project in July in partnership with Chung Woo-jin, a professor at Korea University’s School of Mechanic Engineering.

The team recently developed the first prototype of the robot, named “Dilly.”

Dilly is 82 centimeters (2 feet and 8 inches) tall and looks similar to the body of a vacuum cleaner. It has three compartments designed to hold the food that it is delivering.

The robot moves on four wheels at a speed of around 4 kilometers per hour (2.49 miles per hour) and is equipped with a sensor to spot obstacles and recognize its location.

Self-driving software will ensure that the robot finds its destination without the need for manual control.

Dilly will be presented to the public during this year’s first half, but this doesn’t mean that the robot will immediately start delivering food fresh from restaurants to customers’ doorsteps. It will initially only deliver food at an indoor food court at an unspecified mall outside Seoul.

An average person walks at a speed of 5 kilometers per hour, which means that Dilly will be slower than human delivery men. Baemin explained that Dilly is just the first prototype and is intended to test operations at the food court, ahead of going outdoors.

“Speed is important for food delivery but so is safety - there should be a balance between the two and Dilly is the prototype that will help us start finding that,” said Ryu Jin, the communications head at the app’s operator Woowa Brothers.

“There are so many scenarios that can happen like a child popping out at one moment or people trying to touch the robot out of curiosity. We’re starting at a slow speed to understand the various cases that can happen and use them for robots after Dilly that will venture outdoors.”

Ryu added that the company is seeing robot development as a long-term project that will take at least two or three years before the devices become a common sight around the country.

The trial at indoor restaurants is only the first stage of the project. Once Dilly has grown confident indoors, the company will take the concept outside to operate at venues with boundaries like university campuses or apartment complexes, which Baemin expects may happen later this year.

The final step, where the robots freely move around the city, is likely to come much later.