People with impairments make their own work

People with impairments make their own work 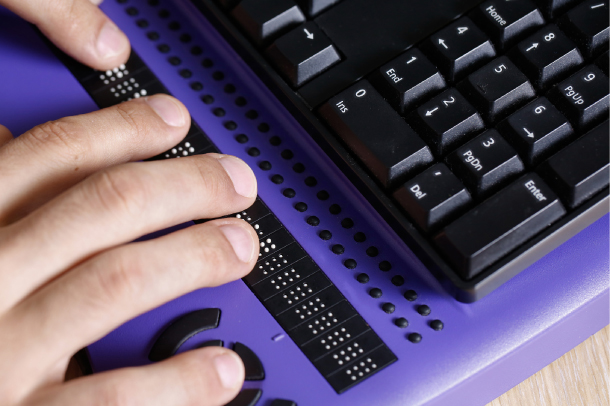 In Korea, disability has often been associated with poverty and low education. One of the biggest obstacles that people with impairments face is the social perception that they are ill-equipped to perform the work of able-bodied people due to their lack of education and isolation. Many have held back on chances at starting their own businesses.

Existing ones founded by people with impairments have limited themselves to providing repetitive and simple services, but that’s all starting to change with the accelerated development of technologies like artificial intelligence and blockchain. They are not only improving the lives of people with physical impairments by helping them see, hear and move, but also giving them opportunities to become entrepreneurs.

Experts say the barriers that have made it difficult for people with impairments to start their own businesses could break the cycle of poverty and low-quality jobs afflicting the population.

Kim Jin-hyeun has been running a drone video production company, Sky Bluebird, for the past five years with her husband, Lee Byung-hwan. Kim is bound to a wheelchair, paralyzed from the waist down after contracting polio when she was 7 months old.

Her company does aerial photography for the country’s major broadcasters. Before starting her own business, Kim worked for 15 years in the public relations office of a social welfare center.

“My hobby was RC cars,” she said, “From there, it naturally moved onto drones, and that turned into a business.”

Her husband contributed funds from his retirement savings. “It was a new area and a challenge when we first started,” he said.

One difficulty was working around clients’ stigma about disability. “When we were looking for work, we had to hide the fact that the company was run by a disabled person,” Kim said.

But the quality of the work spoke for itself, and now, they provide images to major broadcasters like KBS and JTBC.

Entrepreneurs like Kim are helping Korea Inc. rethink ability and disability. XVision Technology is a software company that develops programs for people with visual impairments, including one that converts text to either voice or Braille. XVision differentiates itself by being able to read text within graphics on websites.

The company was founded in 2002 by Song Oh-yong, who lost his sight at the age of 9 after falling from a swing. He first learned about computers in middle school in 1986 and has been coding ever since.

After graduating middle school, he worked as a masseuse, a common profession for people with visual impairments, and continued to dabble in programming until he started XVision Technology with three friends.

“Innovative advancements in artificial intelligence and telecommunications will lead to significant applications of technological equipment and helps those with disabilities see improvement in their lives,” said Jung Kwang-jin, a researcher at the Employment Development Institute.

“The more technologies that become possible in real life, the more they will not only redefine the meaning of being disabled but also contribute to reducing negative perceptions about being disabled, which will lower the barrier in hiring those with disabilities,” Jung added. 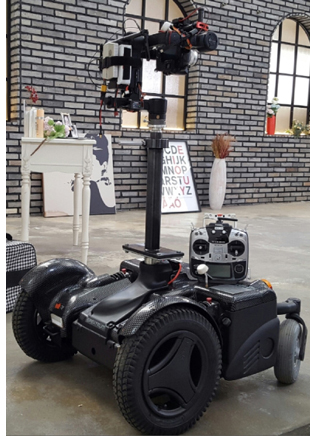 A drone used by Sky Bluebird for its photography. [SKY BLUEBIRD]

Last May, a little-known shoe brand called Agio made headlines after President Moon Jae-in ordered a new pair to replace shoes he had been wearing for five years.

The company’s CEO, Yu Suk-yeong, has a visual impairment, and many of his employees are hard of hearing. The business folded in 2013, but after Moon gave his endorsement, the company was able to secure money to restart again.

Under Moon, the government has earmarked 1.2 billion won this year to help start-ups run by people with impairments. On top of that, the Ministry of SMEs and Startups has set aside 560 million won to help companies develop prototypes of their products.

Many of these companies have traditionally struggled to secure investment. A recent government study found that companies owned by people with impairments numbered over 39,000 in 2015. Among them, 68.6 percent invested their own money. Loans from financial institutions accounted for just 14 percent. Business owners who had to borrow from private lenders that charge higher interest rates accounted for 12.1 percent, and only 2.9 percent of companies got financing from the government.

Starting a business is a challenge, but for many people with impairments, it’s their only choice. Employment rates and income are half those of an able-bodied person, even as they face higher medical costs.

As of 2015, there are 191,723 households receiving disability payments from the government. Many are worried that once they find a job or start a business and make a certain level of income, they will stop receiving government support, which for many covers important medical expenses.

On Monday, eBay Korea announced plans to open a start-up school for people with visual and hearing impairments. The first class will be held on June 27 for people at the Seodaemun Welfare Institution.

The company said it had been providing one-time lectures but decided to expand it to a more systematic program due to growing demand for start-ups.

“We have conducted several educational programs targeted at the blind and deaf,” said Park Ki-woong, a senior director at eBay Korea, “and it turned out the blind and deaf have had more interest than what we had expected, and we’ve learned that there’s a desperate demand for systematic and professional education.”

eBay said it would continue to provide support that contributes to the independence of people with visual and hearing impairments.

Kim Jin-hyeun of Sky Bluebird runs an educational program with her husband teaching other people with impairments about drones. She said she wants to help others in a similar situation as herself cover more than just basic needs like food and shelter - and give them hope and inspiration that anything is possible, especially with today’s technologies.

Jo Byung-wan, a professor at Hanyang University’s department of civil and environmental engineering, stressed the importance of independence for people with impairments, especially in helping them become leaders in society.

“We have to create a positive cycle where these leaders with disabilities succeed in their business ventures and with the profit that they make so they can hire more people with disabilities,” Jo said.

In the past three years, Jo has been offering a free leadership class using technologies associated with the so-called fourth industrial revolution to help those with impairments. About 50 people have successfully completed the program, according to Jo.

The population of people with impairments offers a burgeoning market for companies engaging in assistive technologies.

One such company that has gained international recognition is Neofect, developer of a rehabilitation training system.

At this year’s Consumer Electronics Show in Las Vegas, Neofact presented NeoMano, a robotic glove that helps people with paralysis grab objects. The leather-like glove includes a motor that allows the thumb, index and middle fingers to pick up objects.

Ban Ho-young, founder and CEO of Neofect, said that while he has earned more recognition in Korea, the revenue he makes overseas - in Europe and the United States - is higher.

According to a report by Credence Research released earlier this year, the market for assistive technologies was estimated to be worth $17 billion in 2015. The figure is set to expand to $27 billion by 2022 with an average annual growth rate at 7 percent.