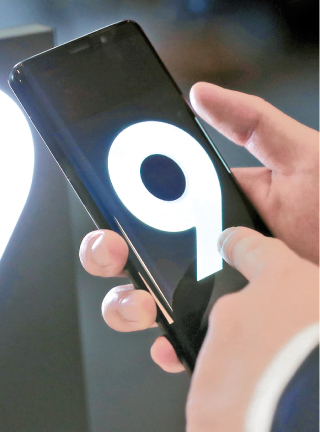 A customer holds up a Samsung Electronics Galaxy S9 during an SK Telecom preorder event on March 9. [YONHAP]

Local preorders for Samsung Electronics’ Galaxy S9 smartphone have fallen short of its predecessors, with most analysts citing the model’s lackluster features and users holding onto their phones for a longer period of time.

The S9 and S9 Plus saw around 30 percent fewer buyers than the S8 series during the preorder period at mobile carriers between Feb. 29 and March 8.

On March 9, the first day of delivery to preorder customers, 180,000 people subscribed to mobile plans at Korea’s three major telecom companies with the S9, about 70 percent of the 260,000 people who subscribed with the S8 a year ago.

The first day of preorder shipments is considered a crucial yardstick for how successful a new phone might be. Samsung used to unveil the number of preorders for the S8 and S7 but did not this time, making mobile carrier figures the only publicly available data. No media event for the S9 is scheduled for reporters in Korea either.

“Whereas we began receiving preorders a week after introducing the S8, the S9’s preorders kicked off just two days after its unpacked event,” a Samsung spokesman said referring to the company’s annual phone unveiling event. “The change would have affected the initial preorder volume.”

This time, there were fewer people who migrated to a different mobile carrier for benefits such as subsidies when buying a new phone. March 9 saw 24,225 migrations among those who had preordered for the S9, much lower than the 46,380 with the S8 and 38,452 with the Note8 phablet, which was sold last fall.

Analysts point to the fact that the S9 models, introduced on Feb. 25 in Barcelona, Spain, do not boast as many attractive elements that would entice Galaxy owners to spend money on an upgrade. Aside from an improved camera and augmented reality emojis, there aren’t many features that distinguish the S9 from the Note8 and S8.

“The S9 has shown meager improvement when compared to the S8 and the initial reaction isn’t that upbeat,” said Lee Seung-woo, an analyst at Eugene Investment and Securities.

Last week, an analyst at Boston-based Arthur Wood Research came up with an even more pessimistic speculation for the Samsung phone.

Jeff Johnston, who has been tracking sales of both Samsung’s Galaxy line and Apple’s iPhone, said the S9 orders in the United States “are down 50 percent over S8,” citing an unnamed “channel.”

He suggested the sluggish Galaxy sales are worse for the industry because it portends “smartphone sales are starting to decline at an accelerating rate.”

Data from research firm Gartner showed in February that global smartphone sales saw a 5.6 percent drop in the fourth quarter of 2017 compared to the same period in 2016 - the first year-on-year fall in history.

The lengthening of the replacement cycle - that is, users keeping their phones for a longer period of time - is one major cause, according to Anshul Gupta, research director at Gartner.

The S9 will hit stores nationwide today with some 4,000 special booths that will allow visitors to try out the new devices.

In-store sales of the S9 are beginning simultaneously in 70 countries, as opposed to S8 sales which were rolled out in batches starting with Canada, Korea and the United States followed by 50 countries a week later.